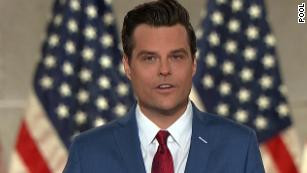 It seems like more problems are piling up for Florida Republican lawmaker, Rep. Matt Gaetz, as it's been alleged he bragged about women he claims he had slept with to his fellow lawmakers and even showed them nude photos of the women.Gaetz is being investigated by the US Justice Department over sex trafficking allegations.He made a name for himself when he arrived on Capitol Hill in 2016 as a conservative firebrand on TV and staunch defender of then-President Donald Trump. According to a new report by CNN, Gaetz gained a reputation in Congress over his relationships with women as he bragged about his sexual escapades to his colleagues.Gaetz allegedly showed off to other lawmakers photos and videos of nude women he said he had slept with, sources tell CNN, including while on the House floor. The sources, including two people directly shown the nude photos, said Gaetz displayed the images of women on his phone and talked about having sex with them.  "It was a point of pride," one of the sources said of Gaetz.Federal investigators are examining whether Gaetz engaged in a relationship with a woman that began when she was 17 years old and whether his involvement with other young women broke federal sex trafficking and prostitution laws.He has not yet been charged.The Justice Department began investigating him in the final months of the Trump administration under then-Attorney General William Barr as part of a larger investigation into another Florida politician.Gaetz has denied the allegations, saying "no part of the allegations against me are true," and he claimed Tuesday that he was the victim of an extortion plot, which the FBI is separately investigating."Over the past several weeks my family and I have been victims of an organized criminal extortion involving a former DOJ official seeking $25 million while threatening to smear my name. We have been cooperating with federal authorities in this matter and my father has even been wearing a wire at the FBI's direction to catch these criminals," Gaetz said in a statement. After the DOJ investigation into Gaetz surfaced this week, House GOP Leader Kevin McCarthy said Wednesday there were "serious implications" involving the DOJ allegations, adding that he would remove Gaetz from the Judiciary Committee if they were proven true."I haven't heard anything from the DOJ or others, but I will deal with it if anything comes to be true" McCarthy said in response to a question from CNN at a town hall event in Iowa.   The post US Lawmaker Matt Gaetz accused of showing nude photos of women he said he'd slept with to his colleagues on congress floor appeared first on Linda Ikeji Blog.