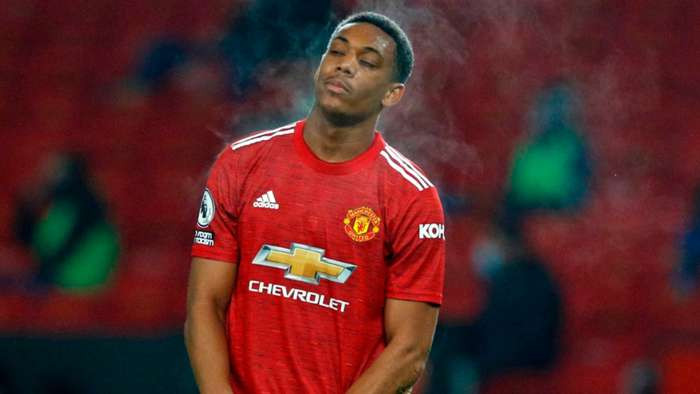 Manchester United football club of England have received a major blow as Anthony Martial is expected to miss the rest of the season through injury.The France star limped out of Les Bleus' Qatar 2022 World Cup qualifier clash with Kazakhstan last month and looks set to miss the next few months with what was initially hoped to be a minor knock. The club has confirmed he has a sprained knee, dampening United's hopes in the Premier League and Europa League while his chances of making the rescheduled Euro 2020 this summer is now in doubt.“Unfortunately, he sprained his knee with France," Manchester United manager Ole Gunnar Solksjaer told MUTV."It’s always when they go away on internationals. You can keep your fingers crossed and hope they come back fit."Solskjaer added that he was pleased to see Martial's fellow countryman Paul Pogba come out of injury: "Paul has played in all three games, 30, 60, 90 minutes, so that was a boost for us.“[But] losing Anthony for what might be the rest of the season is very disappointing, especially when reports from there [France] was that it wasn’t anything serious but it looks a bad one.”Solksjaer also admitted that Edison Cavani's return to fitness was at least a good news for the club."It's good timing," he added "He has been working hard to get his fitness and luckily we have him back so that's a positive."When there are international breaks you never know. Some of them used it to stay here and it worked out. A couple have played through the pain and some we have lost. I'm happy we have enough to fill the bench."The post Manchester United confirm star player Anthony Martial out for rest of season with knee injury appeared first on Linda Ikeji Blog.