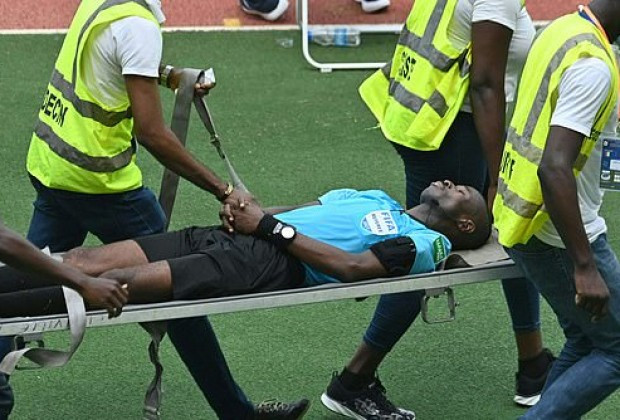 The Africa Cup of Nations qualifier between Ivory Coast and Ethiopia witnessed a scary scene after the center referee collapsed on the pitch.The incident occurred after 80 minutes of play with Ivory Coast leading 3-1 during their Afcon clash on Tuesday, March 30. In the clip posted on Twitter, Ghanaian referee Charles Bulu is seen slowly walking towards the medical staff while being helped by players before closing his eyes and falling to the ground towards the end of the game.Bulu was treated on the pitch before being carried off on a stretcher and taken to a local hospital for tests.According to the report, the official was promoted to the top job after the referee who was originally given the game tested positive for Covid-19. However, the fourth official was unable to take charge for the remainder of the match because he is Ivorian - and could be accused of bias in the game. After several discussions between officials and coaches, Kenyan assistant referee Gilbert Cheruiyot filled in as referee to oversee the final minutes of the match.  Watch the video below.How it happened pic.twitter.com/IW2gTXSi1p— Goaldigger® (@betplaceke) March 30, 2021The post Moment referee collapses on the pitch during Africa Cup of Nations qualifier between Ivory Coast and Ethiopia (video) appeared first on Linda Ikeji Blog.