Man breaks wife's jaw during argument over their dog's dinner 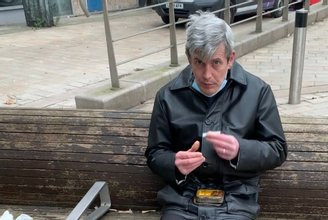 A man broke his wife’s jaw during an argument over their dog’s dinner, forcing her to have emergency surgery.Patrick Coleman, 47, had an argument over the dog's dinner with his wife Jaqueline Coleman and attacked her until she was rescued by a neighbour.According to reports,  he was spared jail after his wife told the judge it would hurt her family financially and cost her sons their home if he went to prison.Liverpool Crown Court heard he was being "aggressive" in their living room in St Helens, Merseyside on October 10, 2020. Judge David Aubrey said the argument “appears to have related to the family dog” and how it was “either eating or not eating his or her meal” when he "lost it".Speaking to Coleman, the judge said; "the red mist descended" and "it was the first occasion that you had ever laid a finger on your wife”.The judge said if there had been “any suggestion of prior domestic violence” he would have been jailed.Paul Blasbery, prosecuting, said Coleman shoved his wife backwards, and then when she pushed him back, he punched her in the left side of her jaw.He grabbed her and threw her onto the stairs, before “constantly punching her to the face and the body”.He then pushed her onto a sofa and put his hands around her neck, but "thankfully" a neighbour rushed inside and stopped the violence.Two days later Mrs Coleman went to the hospital and had her jaw moved back into the correct position, with a titanium plate and four screws inserted.Coleman told police "it was my fault" when arrested.He admitted inflicting grievous bodily harm and was handed a 12-month suspended sentence.In a victim statement, Mrs Coleman said he had never previously been violent during their 26-year relationship.She said she was concerned about the future, had debts and a mortgage that she couldn't afford to pay on her own, if he was jailed and if she was not able to help with caring responsibilities she might also lose her job, she added.Mrs Coleman said: "I worry this will feel like we've been punished more than Patrick."Charles Lander, defending, said Coleman had lost his home and "the love of his wife".Coleman wanted to "reunite" with his family "if they would want to be reunited with him”, he added.He said Coleman, who was living in a rented bedsit but also paying towards his mortgage, had mental health issues and was drinking before the attack.He is now free but stands the risk of facing imprisonment  if he attacks his wife again.The post Man breaks wife's jaw during argument over their dog's dinner appeared first on Linda Ikeji Blog.