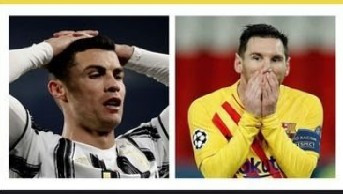 Football legends, Lionel Messi and Cristiano Ronaldo, for the first time since the 2004-05 season, have bowed out of the UEFA Champions League before the quarter-final stage, signaling a possible era change for the dynamic duo who have lit up our football screens for the last two decades. Juventus crash out on Tuesday March 9following a poor performance against Porto home and away while FC Barcelona crashed out against a superb Paris Saint Germain (PSG) on Wednesday night, March 10,  despite Barca trying their best on the night .Neither Messi’s nor Ronaldo’s clubs will feature in the quarter-final stage of the Champions League season.FC porto's Sergio Oliveira's extra-time free-kick confirmed Ronaldo's third straight knockout round exit with Juventus. Then on Wednesday night, March 10, Kylian Mbappe-inspired PSG avenged their 2017 trounce at the hands of Barcelona by registering a 1-1 draw at the Parc des Prince.Though Messi netted a stunning goal in the 2nd leg, he missed a crucial penalty to help Barca qualify for the quarter-finals with a 5-2 margin on aggregate. Back in the 2004-2005 season, the Catalan giants were outclassed by Jose Mourinho's Chelsea in the last 16 of the Champions League during the 2004-05 season.While Ronaldo represented Manchester United when AC Milan thwarted Red Devils' bid of entering the quarter-finals at the time. The 2005 edition of the UEFA Champions League was won by Steven Gerrard-led Liverpool. The Reds had upstaged AC Milan in the famous Istanbul final on penalties to lift their fifth European crown at the Ataturk Olympic Stadium. Aged 33 (Messi) and 36 (Ronaldo), the era of both superstars might be coming to an end....The post Lionel Messi and Cristiano Ronaldo miss out on the quarterfinals of the Champions league for first time in 16 years appeared first on Linda Ikeji Blog.