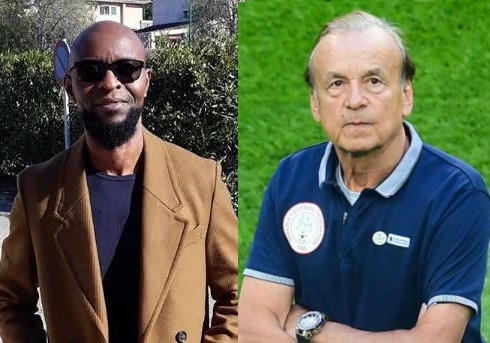 Former Super Eagles player, George Finidi, has faulted coach Gernot Rohr's squad list for Nigeria’s 2022 Africa Cup of Nations qualifiers against Benin Republic and Lesotho.  On Tuesday, March 9, the German coach released a 24-man list that included Super Eagles captain, Ahmed Musa, who has been without a club since leaving Saudi Arabian side Al Nassr last October. Genk striker Paul Onuachu, who has scored just once in seven appearances, has failed to replicate his club form for the national team. For his club, he has scored 26 goals with three assists in 30 games across all competitions.  Speaking with Punch, George Finidi admitted that Musa is a quality player who has done a lot for the country but should not be on the list on the basis of form or fitness. The 49-year-old former winger also questioned the process of inviting players to the national team before saying that striker Paul Onuachu’s poor form with the Eagles has been down to poor coaching. “Coaches should be made to defend their list when they come up with names that are questionable. Coaches should not be left alone. “They should be made to explain how they arrived at certain decisions on who they invite. Journalists should question the names on the list.” “I have a problem with his list, selecting centre-backs as midfielders and right-backs in the midfield.” “In the case of Paul Onuachu, who was snubbed, if you want a player to perform, you set up your formation in a way to make him comfortable. He has struggled largely because of poor coaching.” “This is Rohr. The coach you expect to take us to the World Cup and win the AFCON. If he was a Nigerian that made these decisions, we would critique him, but here’s a coach who is supposedly very experienced, the choices are questionable.” The Super Eagles will face Benin in Porto Novo on March 27 before facing the Lesotho three days later in their final 2021 Africa Cup of Nations qualifier at the Teslim Balogun Stadium, Surulere, on March 30. See full squad list below. Goalkeepers.  John Noble, Maduka Okoye, and Francis Uzoho.  Defenders. Kenneth Omeruo, William Troost-Ekong, Leon Balogun, Tyronne Ebuehi, Ola Aina, Jamilu Collins, Zaidu Sanusi, and Chidozie Awaziem.  Midfielders. Wilfred Ndidi, Abdullahi Shehu, Oghenekaro Etebo, Semi Ajayi, and Joe Aribo.  Forwards. Moses Simon, Samuel Chukwueze, Kelechi Iheanacho, Alex Iwobi, Victor Osimhen, Sadiq Umar, and Samuel Kalu.  Standby list. Paul Onuachu, Peter Olayinka, Terem Moffi, Michael Olise, Daniel Akpeyi, and Henry Onyekuru.   The post Ex footballer, Finidi George faults coach Gernot Rohr over AFCON qualifiers squad appeared first on Linda Ikeji Blog.