"Can you just tell them the truth?" Meghan Markle says royal family kept silent when the press vilified her for not doing a photo op after her son's birth like other royals 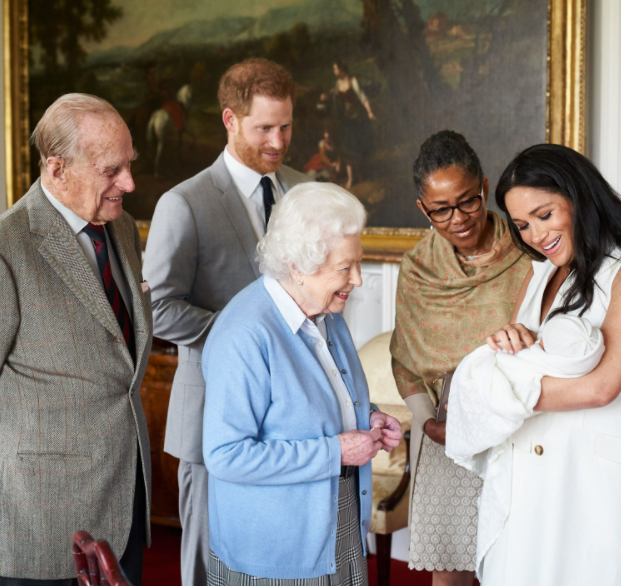 Meghan Markle accused the royal family of keeping silent while the press twisted stories about them and distorted the truth. During her bombshell interview with Oprah Winfrey, she told of how her son was denied a royal title, which she believes has to do with his race. Meghan went on explain that royal family members allegedly said they wanted "to change the convention" of royal titles specifically for Archie. "They didn't want him to be a prince or princess ... which would be different from protocol and that he wasn't going to receive security," Meghan said. "It was really hard. ... This went on for the last few months of our pregnancy. ... I was very scared of having to offer up our baby, knowing that they weren't going to be kept safe." She said that her thought at the time was: "He needs to be safe, so we're not saying don't make him a prince or princess, whatever it's going to be. ... We haven't created this monster machine around us in terms of clickbait and tabloid fodder. You've allowed that to happen, which means our son needs to be safe." She said there was "no explanation" given about the lack of royal title for her son. She continued: "I heard a lot of it through Harry and parts of it through conversations with family members. It was a decision that they felt was appropriate." She added that though she understands the pain of being a working member of the royal family, a royal title was her son's birthright and the decision to go without it was his to make. "It's not their right to take it away," she added. Winfrey also asked her about the fact that she and Harry didn't pose for the traditional picture with their child after she gave birth and she replied that they weren't asked to pose for the photo. She added that when they were called out for it, the royal family kept silent. "That's also part of the spin that was really damaging," Meghan recalled. "I thought, 'Can you just tell them the truth? Can you tell the world you're not giving him a title, and we want to keep him safe?" Meghan also addressed race within the royal family and how the treatment she said she saw of Archie confused her. She told Oprah: "Growing up as a little girl of color, I know how you want to see someone who looks like you in certain positions. I could never understand how it wouldn't be seen as an added benefit and a reflection of the world." Later, Winfrey asked Prince Harry after he joined the interview about the conversation about their son's skin tone and Harry said: "That conversation I am never going to share, but at the time it was awkward and I was a bit shocked." When Winfrey asked if he would reveal what the question was, he responded, "No. I'm not comfortable sharing that. But that was right at the beginning... what will the kids look like?" Watch the video below.  The post "Can you just tell them the truth?" Meghan Markle says royal family kept silent when the press vilified her for not doing a photo op after her son's birth like other royals appeared first on Linda Ikeji Blog.