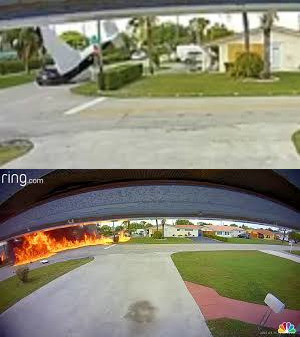 Three people have died and one other was injured when a small plane crashed in Pembroke Pines Monday afternoon, March 15. It happened in the area of Southwest 72nd Avenue and 13th Street. According to Pembroke Pines Fire Rescue, two people were on board the Beechcraft Bonanza at the time of the crash. Both were pronounced dead at the scene. A woman and a young boy, who were inside the SUV, were taken to Memorial Regional Hospital with traumatic injuries. Pembroke Pines Fire Chief Marcel Rodriguez confirmed the boy died from his injuries late Monday evening. Aerial footage showed the woman was conscious and alert while she was being placed in the back of an ambulance. The child was pinned inside of the car and had to be freed by firefighters. According to authorities, the vehicle was traveling northbound on 72nd Avenue when it was hit by the falling plane, which also took out a power line during the crash. According to the Federal Aviation Administration (FAA), the plane was a single-engine Beechcraft Bonanza that crashed shortly after it took off from North Perry Airport at approximately 3p.m. Several firetrucks and an ambulance arrived, as the plane became engulfed in flames that were extinguished shortly after. No information has been released regarding passengers’ identities. Watch the video showing the moment the plane crashed below.      View this post on Instagram           A post shared by Lindaikejiblog (@lindaikejiblogofficial)The post 3 dead after small plane crashes in residential area of Pembroke Pines (video) appeared first on Linda Ikeji Blog.