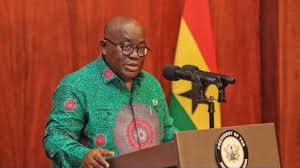 The president of Ghana, Nana Akufo-Addo has declared that same-sex marriage will never happen during his tenure.He made this declaration at the installation and enthronement of a program of an Anglican Archbishop held in Mampong on Saturday February 27. In his words''I have said this before and let me stress again that it will not be under the Presidency of Nana Akufo-Addo that same sex marriage will be legalised in Ghana. It will never happen. Let me repeat, it will never happen.''he said to the cheering audience.''he said His declaration comes following the recent closure of a recently opened LGBTQ+ office in Accra, the capital city. The office was opened but not many knew it was for the LGBTQ community. Immediately it came to light what the office was meant for, the police and the landlord of the building where it is situated, stormed the place and shut it down. This has caused a national discussion in Ghana. Watch the videos below...      View this post on Instagram           A post shared by Lindaikejiblog (@lindaikejiblogofficial)      View this post on Instagram           A post shared by Lindaikejiblog (@lindaikejiblogofficial)The post Same-sex marriage will never happen during my tenure - Ghanaian president, Nana Akufo-Addo says (video) appeared first on Linda Ikeji Blog.