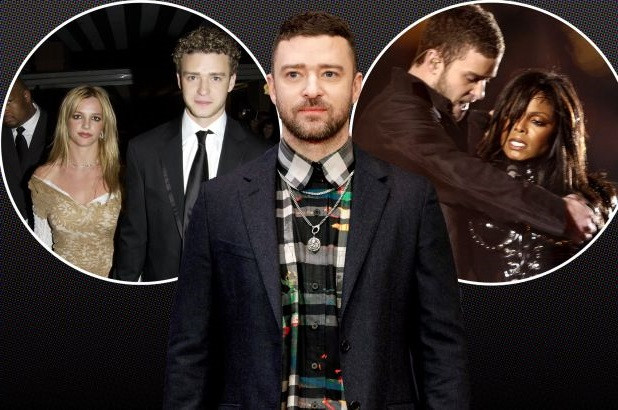 Justin Timberlake has apologised to his former girlfriend Britney Spears in the wake of accusations of sexism and misogyny after a new documentary led to criticism of how he treated her during and after their relationship The singer also apologized to Janet Jackson, after failing to support her over their controversial Super Bowl performance in 2004. The apology comes following the airing of "Framing Britney Spears," a documentary that focuses on the conservatorship she has been under since 2008 but more broadly addresses the sexist and judgmental way she has been treated by the media and others throughout her career. It has led to criticism of Timberlake and other figures including journalist Diane Sawyer, who told Spears during a 2003 interview she had "disappointed a lot of mothers", and gossip blogger Perez Hilton, who was involved in the coverage of her 2007 breakdown. 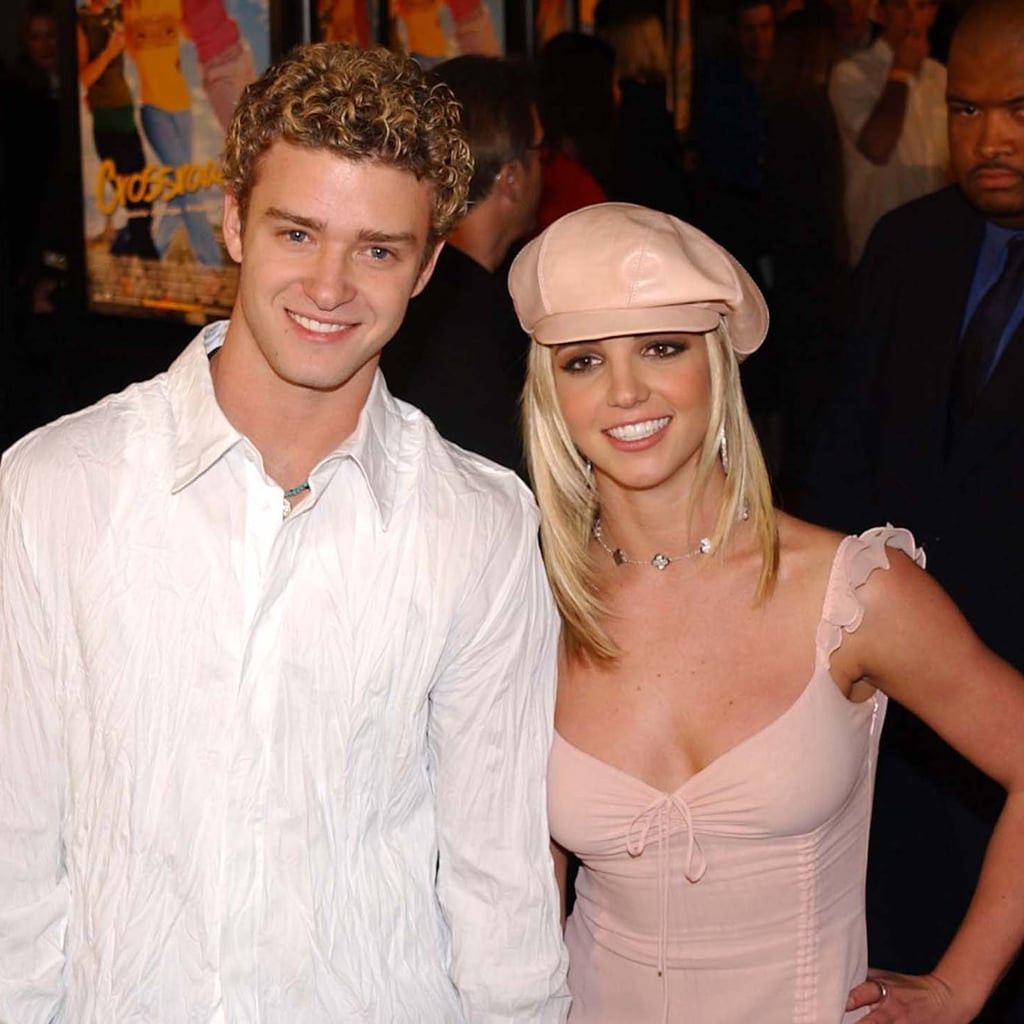 Timberlake and Spears dated between 1999 and 2002, while he was a member of boy band N*Sync. After their split, he indirectly accused her of cheating on him when he hired a lookalike actress to appear in the video for his single Cry Me A River. The 2004 Super Bowl scandal revolves around what Timberlake described at the time as a “wardrobe malfunction,” in which he pulled back part of Jackson’s outfit and exposed her breast, causing an outcry and an aggressive investigation by the Federal Communication Commission. 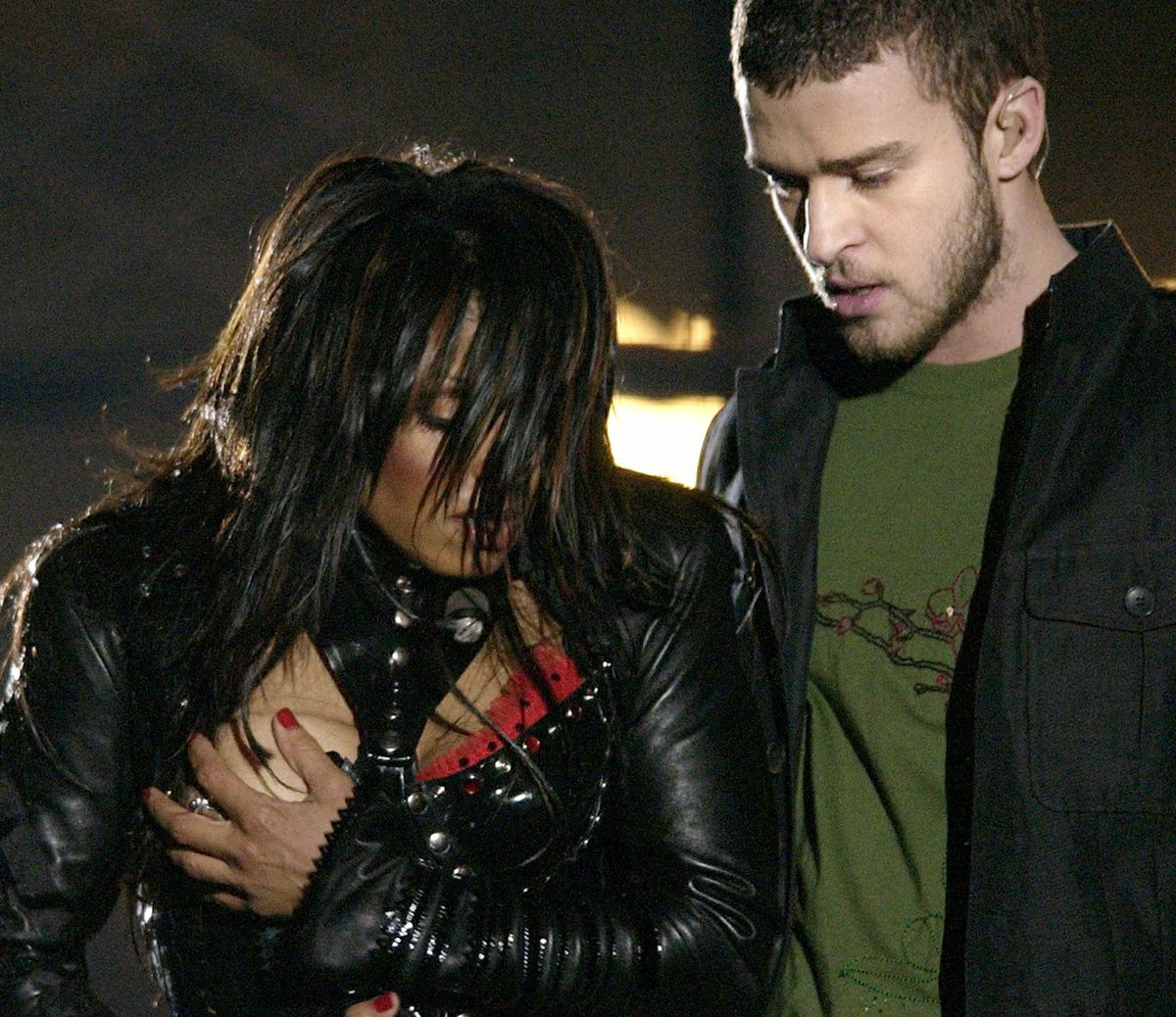 In his apology, Timberlake wrote:"I've seen the messages, tags, comments, and concerns and I want to respond. I am deeply sorry for the times in my life where my actions contributed to the problem, where I spoke out of turn, or did not speak up for what was right. I understand that I fell short in these moments and in many others and benefited from a system that condones misogyny and racism."I specifically want to apologise to Britney Spears and Janet Jackson both individually, because I care for and respect these women and I know I failed. I also feel compelled to respond, in part, because everyone involved deserves better and most importantly, because this is a larger conversation that I wholeheartedly want to be part of and grow from."The industry is flawed. It sets men, especially white men, up for success. It's designed this way. As a man in a privileged position I have to be vocal about this. Because of my ignorance, I didn't recognise it for all that it was while it was happening in my own life but I do not want to ever benefit from others being pulled down again."I have not been perfect in navigating all of this throughout my career. I know this apology is a first step and doesn't absolve the past. I want to take accountability for my own missteps in all of this as well as be part of a world that uplifts and supports. I care deeply about the wellbeing of the people I love and have loved. I can do better and I will do better." 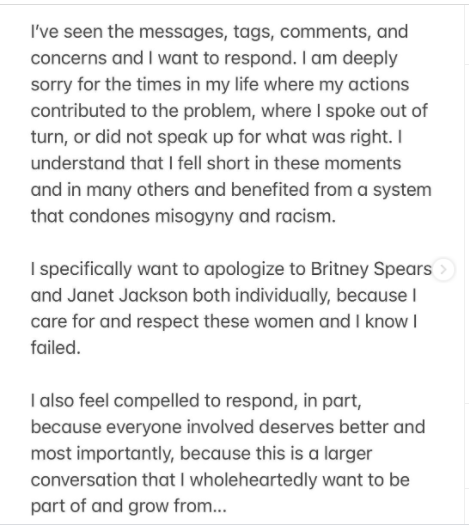 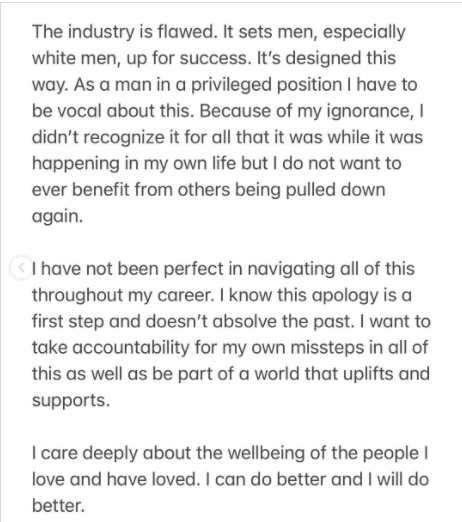