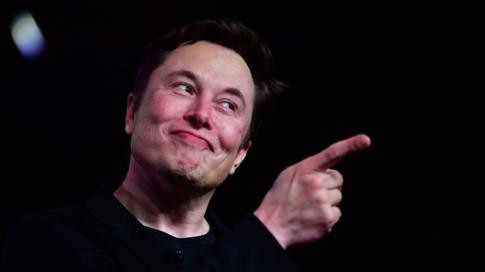 Elon Musk's car production firm, Tesla has  bought about $1.5bn (£1.1bn) of cryptocurrency Bitcoin, causing the price of Bitcoin to jump 17% to $44,220, a record high. Tesla also announced that the company will start accepting bitcoin as payment for it's products in the nearby future as the company was trying to maximise returns on cash that is not being used in day-to-day running of the company.The move by billionaire Musk, comes days after Musk added "#bitcoin" to his Twitter profile page,  another move that drove up the price.Musk regularly talks up Bitcoin and other cryptocurrencies, including Dogecoin, currencies he has endorsed.In a stock market filing on Monday, February 8, Tesla said it "updated its investment policy" in January and now wanted to invest in "reserve assets" such as digital currencies, gold bullion or gold exchange-traded funds. 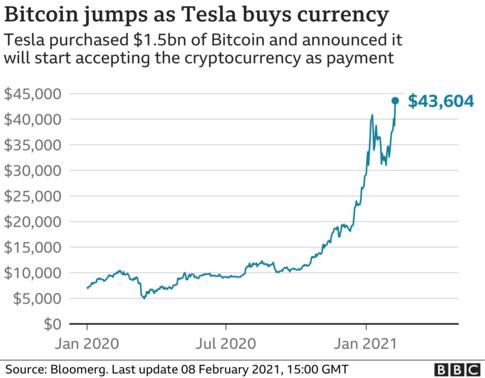 It said it had already bought $1.5bn of Bitcoin and could "acquire and hold digital assets" in the future."Moreover, we expect to begin accepting Bitcoin as a form of payment for our products in the near future, subject to applicable laws and initially on a limited basis," it said.Musk announced last week that Bitcoin was "on the verge" of being more widely accepted among investors."I think we will see an acceleration of companies looking to allocate to Bitcoin now that Tesla has made the first move," said Eric Turner, vice-president of market intelligence at cryptocurrency research firm Messari."One of the largest companies in the world now owns Bitcoin and by extension, every investor that owns Tesla, or even just an S&P 500 fund, has exposure to it as well." Despite the rise of bitcoin, some banks remain sceptical of digital currencies. Nigeria's central bank last week banned the use of cryptocurrency while in October, the Bank of England governor, Andrew Bailey cautioned over Bitcoin's use as a payment method."I have to be honest, it is hard to see that Bitcoin has what we tend to call intrinsic value," he said. "It may have extrinsic value in the sense that people want it." The post Bitcoin surges past $44,000 after Elon Musk's Tesla buys $1.5 billion worth appeared first on Linda Ikeji Blog.