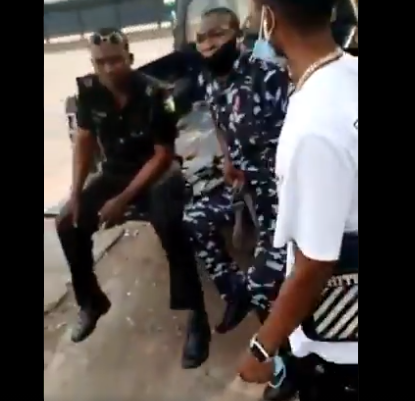 A young Nigerian man has called out some policemen who he claims harassed and tried arresting him “unlawfully”.  @davidowahab disclosed that he and others in the vehicle were stopped by police officers while heading towards Ikorodu road in Lagos. He said the policemen refused to let them go after checking the papers and seeing it was complete.  He further stated that they were accused of making a U-turn even though there was no sign there and after they also saw other cars making same turn without getting stopped.  The Twitter user further revealed that they were allowed to go after one of them called another police officer.  He tweeted;  Good day my fellow Nigerians. This what happened this morning on our way going to Lekki (Along Anthony Ikeja) we are heading towards Ikorodu road when these rogue men in uniform stopped us again.They started searching our car uncontrollably. they checked our paper and everything Was Completed. they told us to come down from the car which we did.the next thing d other man said we should go and meet their oga. that's where I started shouting what is our offense why would we meet your oga.Bcos I already sense that all their effort trying to find anything Incriminating was futile so they want to forcefully extort us. We reluctantly meet the oga. I asked the oga pls what is our offense, oga said we used the "wrong u-turn" which is a lie, bcos about 4 to 5 motors made a u-turn there, our car was the only one they stopped bcos theySense maybe we were Yahoo boys so that they can exhort us as usual. That's when I brought out my phone to start recording dem. One guy said "call the anti-robbery Squad I was saying to myself which offense did we commit. However, SARS is the Only Anti-robbery squad I know and They had banished dem so whc SARS again are we talking about here. I nvm I continue my video, in the course of it one of dem even slapped me but I continue.To cut the long story short: one of us called a fellow Police officer that speaks to dem b4 they let's goThe boy that put on a white shirt the boy is not among us they also arrested the boy too, we even met the boy there. According to the boy he was coming from the Airport and he orders Uber that picked him from the Airport on getting here the Police men forcefully arrested the boyAnd told the Uber man to be going. they also seized his Passport. Someone would even think that all the innocent lives that were lost during the #EndSARS protest would even serve as a deterrent to dem so that they can desist from their Illicit act. But No! Contrary is the case.Pls fellow Nigerians pls do well and tag the international body to create more awareness that Police brutality is still the order of the day in Nigeria 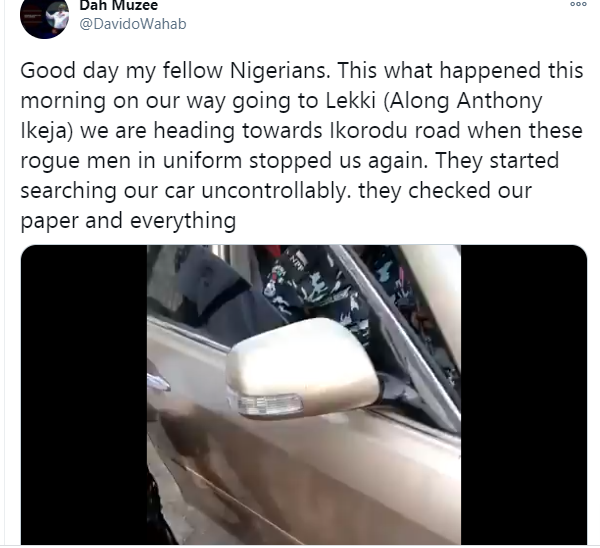