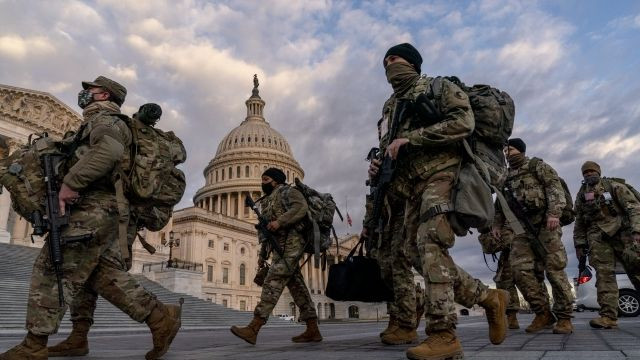 Twelve U.S. National Guard members have been removed from securing President-elect Joe Biden’s inauguration including two who made extremist statements in posts or texts about the Wednesday event, Pentagon officials said.  Each of the dozen Guard members were sent back to his or her home state for later investigation either by their chain of command or law enforcement, officials said. All the 25,000 National Guardsmen now in Washington assisting with security at Wednesday's presidential inauguration are being vetted by the FBI. Two U.S. officials also told The Associated Press that all 12 were found to have ties with right-wing militia groups or posted extremist views online. Two of the Guard members had made what Pentagon officials called an "inappropriate" text and comment while the other 10, officials said, had engaged in questionable behavior unrelated to extremism. One of the Guard members was reported through the chain of command, the other was reported through an anonymous tip line, according to Jonathan Hoffman, the chief Pentagon spokesman. The other 10 Guard members were flagged by the FBI's broad vetting process that looks at more than just whether there are ties to extremism. "These are vetting efforts that identify any questionable behavior in the past or any potential link to questionable behavior, not just related to extremism," Hoffman said. "If there's any identification or anything whatsoever that needs to be looked into, out of an abundance of caution we automatically pull those personnel off the line, and make sure that they're not part of the mission set," said Gen. Daniel Hokanson, the Chief of the National Guard Bureau, at a Pentagon news conference. "And in certain cases we make sure that we get them sent home." Hoffman said that Guard commanders are immediately removing any members who are reported to have engaged in questionable behavior and worry about follow-on action later. "We're not even asking what the flag was we're just removing them," said Hoffman. "We're not taking any chances," said Hoffman. "We'll ask questions later and we will ascertain whether any action needs to be taken by the law enforcement or by their chain of command."    The post Two national guard members who made extremist statements about Biden inauguration removed with 10 others following findings during FBI screenings appeared first on Linda Ikeji Blog.