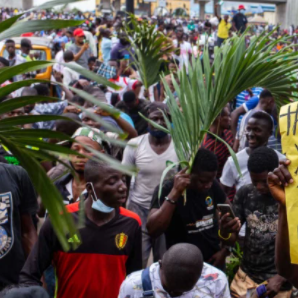 One person was shot while a car and several bicycles were burnt after a peaceful protest organized by residents of Kafanchan in Kaduna State over outrageous electricity bills and epileptic power supply, turned violent on Monday, January 18. The protesters in their numbers stormed the Kaduna Electricity Distribution Company (KEDC), Kafanchan business office carrying placards with inscriptions: ‘Stop charging us high’, ‘Stop the blackout’, ‘Give us stable power supply. Some of the protesters lamented that power supply in the area was not commensurate with the ‘high billing’ they usually received monthly. They maintained that the power situation in Kafanchan had deteriorated in recent times and called for an end to excessive billing by KEDC. The protest however turned violent when the security agents in their bid to contain the protesting, fired a shot that hit the back of one of the protesters. A car and several motorcycles were burnt afterwards.  The post One shot as Kaduna residents protest outrageous electricity bills KEDC appeared first on Linda Ikeji Blog.