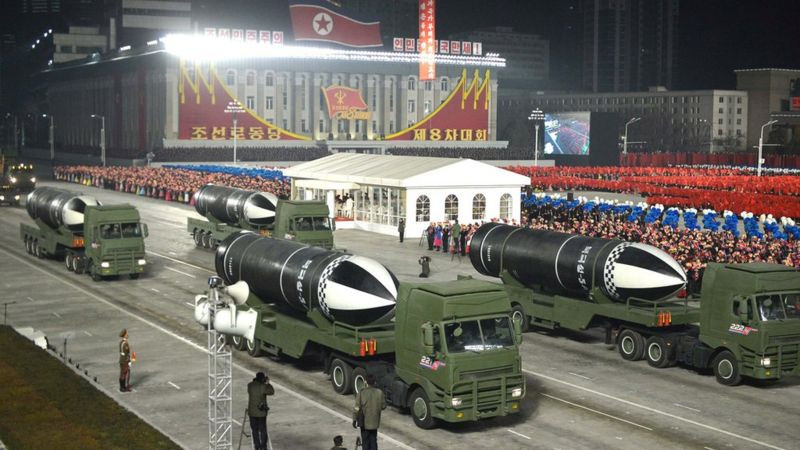 The secretive state of North Korea has unveiled a new type of submarine-launched ballistic missile, described by state media as "the world's most powerful weapon".Several of the missiles were displayed at a parade overseen by leader Kim Jong-un, on Thursday in Pyongyang and comes days before the inauguration of Joe Biden as US president, giving the new president fresh foreign policy challenges as Trump's diplomacy with North Korea failed to work."The world's most powerful weapon, submarine-launch ballistic missile, entered the square one after another, powerfully demonstrating the might of the revolutionary armed forces," the official Korean Central News Agency said. The event on Thursday did not showcase North Korea's largest intercontinental ballistic missile (ICBM), which was unveiled at a much larger military parade in October. That colossal weapon is believed to be able to deliver a nuclear warhead to anywhere in the US.The weapon unveiling also comes after Kim called the US his country's "biggest enemy".He said that the US was Pyongyang's "biggest obstacle for our revolution and our biggest enemy... no matter who is in power, the true nature of its policy against North Korea will never change".Analysts noted it was a previously unseen weapon. "New year, new Pukguksong," tweeted North Korea expert Ankit Panda, using the North Korean name for their submarine-launched ballistic missiles (SLBMs). Wearing a leather coat and fur hat, leader Kim is pictured smiling and waving as he watched the display in Pyongyang's Kim Il Sung Square, which also included infantry troops, artillery and tanks. The post North Korea unveils new submarine-launched missile called "the world's most powerful weapon" appeared first on Linda Ikeji Blog.