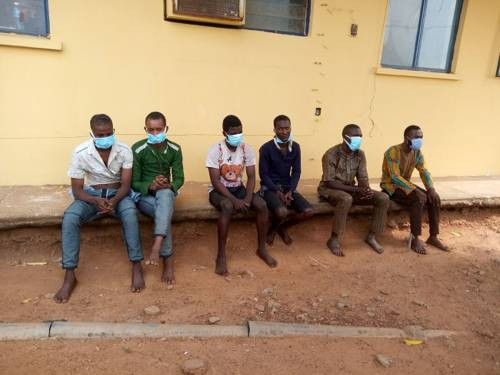 The Kwara State Police Command has arrested one Akinsola Babatunde aka Mr. White for planning, with a group of other persons currently at large, to organize a nude party in selected places in Ilorin, the state capital. Parading the suspect before newsmen, the state Commissioner of Police, Mohammed Bagega, said credible intelligence on the organizer's activities led to the arrest of the suspect at No. 16 Achimugu Street, Ilorin. According to Bagega, the organizers of the party had advertised the show on social media for prospective attendees to pay a gate fee of N20,000 per person. He said the organizers had planned to hold the sex party in lounges, clubhouses, and service apartments. "The immoral and illegal action of Mr White and his accomplices contradict the COVID-19 protocols and promote crime and criminality.Operatives of the State Intelligence Bureau attached to the command carried out a string operation involving tactical undercover and manoeuvre.We played along with them by posing as interested persons. We paid the advertised sum of N20,000 to a given bank account. With the other stakeholders' cooperation, we arrested the suspect while going to withdraw the money in the bank.Efforts are ongoing to arrest the fleeing members of the gang. The one in custody will be charged as soon as investigation is completed."Babega said The post Kwara police arrests organizers of a nude party in Ilorin (photo) appeared first on Linda Ikeji Blog.