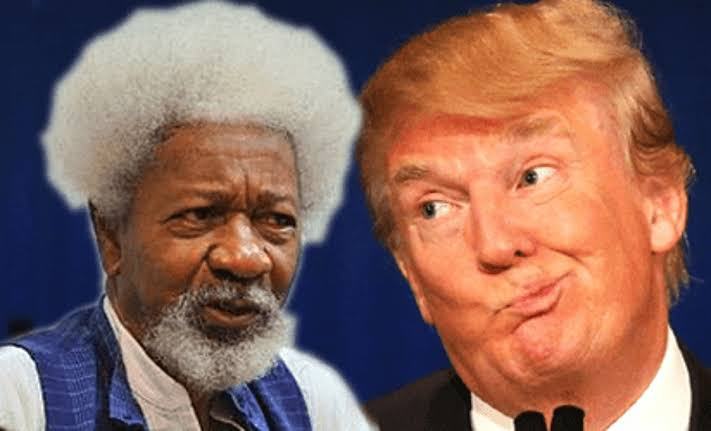 Nobel Laureate, Prof Wole Soyinka has stated that he is not interested in applying for his US Green Card any time soon despite the exit of Donald Trump as President of the United States of America.Trump left office on Wednesday, 20 January 2021, with Joe Biden taking over.Soyinka warned US voters not to vote Trump in as President and threatened to tear his American Green Card if Trump won the election. On November 2, 2016, six days before the US election, Soyinka, told a student audience at Oxford University’s Ertegun House that he would hold his own, self-described “Wolexit” if Trump won, and destroy his green card.“If in the unlikely event he does win, the first thing he’ll do is to say [that] all green-card holders must reapply to come back into the US. Well, I’m not waiting for that,” he said at the time. “The moment they announce his victory, I will cut my green card myself and start packing up.”Reacting to the exit of Trump, Soyinka in a new media interview said;"Donald Trump and his constituency lynched George Floyd and many more of his race. Here, we lynch school pupils, traumatize them for life, sell the females – yet again – into slavery.""That the same unrepentant misfit should earn the votes of nearly half the votes of America’s supposedly mature, supposedly history conscious population – not counting the unsolicited votes from his Nigerian slave plantation – is too unsettling. I am already trapped in one shithole country, why should I rush to restore the duplication of my status?""No, I shall not be applying for restoration of the Green Card any time soon. One Green document will more than suffice!” The post 'I'm not interested in applying for fresh Green Card soon' Wole Soyinka reacts to Trump's exit appeared first on Linda Ikeji Blog.