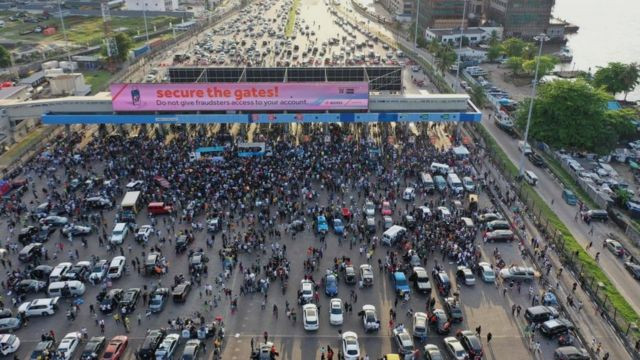 A doctor at Reddington hospital, Babajide Lawson has disclosed that he treated people with gunshots injuries after the Lekki tollgate shooting of October 20, 2020. The trauma and orthopaedic surgeon at Reddington hospital who testified before the Lagos judicial panel on Saturday January 30 and was cross examined by Olumide Fusika and Adesina Ogunlana, the two lawyers representing victims of the shooting, said there was "mass casualty" from the shooting and victims were brought to Lekki and Victoria Island branch of the hospital on October 20, 21, and 22. When being cross-examined by Fusika to confirm the identities of those he treated, Lawson said;   “Yes, it’s our medical report. I don’t know them personally but I know them as patients that I treated.“Being in charge of trauma, it means that anybody that is involved in traumatic injuries such as accident and gunshots must go through me in both of our locations.“On that 20th, a lot of the patients were treated at the Lekki office. Later on the night of 20th, I also went to the Lekki office to assess the level of assistance needed in my capacity and I also spoke with the MD of that branch. That night, I transferred a patient to the VI office which is our headquarters where I work from and where he stayed till the 23rd.“On the first night, there are about six patients that I saw at that night, but as the day goes by, other patients trickled in.” When asked why a medical report was not issued to one Samuel Oshola who was also treated at the hospital alongside other victims of Lekki tollgate shooting, Lawson responded by saying;   “We witnessed what we can call ‘mass casualty’ that overwhelmed our facilities because a lot of people with varying degrees of gunshot wounds were being brought into the hospital for treatment on October 20 and days after it. “However, if the person is requesting for a report, we would check the treatment files and file a medical report.” Lawson who identified some of his patients as  Ajogwu Japheth, Philemon Lucky, Samuel Oshola, Nnaji Madem, Bright Osariemen, Damilola Adedayo and Joshua Samuel, said he didn't treat Joshua Samuel but made recommendations after it was discovered that a bullet shell logged close to his vital organs. He said victims of the shooting who were treated at Lekki branch of the hospital will be captured in the testimony of one Dr Opakunle who will be appearing before the panel on February 15.The post Doctor reveals he treated persons with gunshot injuries from Lekki tollgate shootings appeared first on Linda Ikeji Blog.