We need to stop herdsmen from roaming around - Garba Shehu 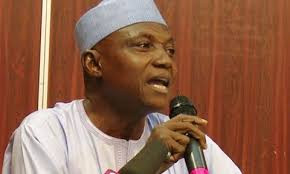 Presidential spokesman, Garba Shehu has disclosed the need to stop herdsmen from roaming all over the country to prevent clashes with farmers. Speaking in an interview on Channels Television, Shehu who reacted to an allegation of President Muhammadu Buhari grabbing lands to dole out to herdsmen, blamed the actions of the herdsmen on the drying of grazing lands in the north. The presidential spokesperson noted that these herdsmen drive their cows to farmlands to eat up crops, leading to clashes with farmers.  He said;  “This country has a grazing problem because the herders are mostly Fulanis. The challenge is from these places they had practiced, you know, the encroachment by desert leading to drying up of a lot of grazing lands in the northern-most parts of the country.“This has put pressure on the herders who have been looking to the south-west green grass so that their cattle will eat and also have water to drink. It’s a global climate situation which is unfortunate considering what has happened along the lake chad basin.“I’m glad that governors of the north are coming together to say let us resolve this problem of grazing because we have to stop these herders from roaming and eating up our crops all over the country.“They drive their cattle into farmlands and eat up the crops. The farmers fight back and the killings follow. The country cannot continue in this way.“The president has no plan to fish for a land other than the one he has inherited from his father. Some of them have even be donated for community purposes but I think we need to get our facts right when we speak on some of these issues.” On insecurity in the north-east particularly in Borno, Shehu said;  "Progress has been made, “a lot of it”.  Yobe, Bauchi, Gombe, Taraba and Adamawa have all moved on from insecurity issues.“And we are hoping and praying for our brothers in Borno state that they too, with the support of the military and the communities, they will rid themselves of Boko Haram. “The president has said times without number that his expectations are still to be met, that means we are not exactly where we wish to be. However, a fair judgement that can be made about ongoing efforts of the administration is tojudge it by the responses it makes when challenges of security comes up.“In all countries of the world, there is always one form of security challenge, the thing, then, to do is how do you respond? The present administration has responded within the capacity, competence using available resources and manpower and all the limitations that come with that. So, can we get better? We hope we will continue to improve.”The post We need to stop herdsmen from roaming around - Garba Shehu appeared first on Linda Ikeji Blog.