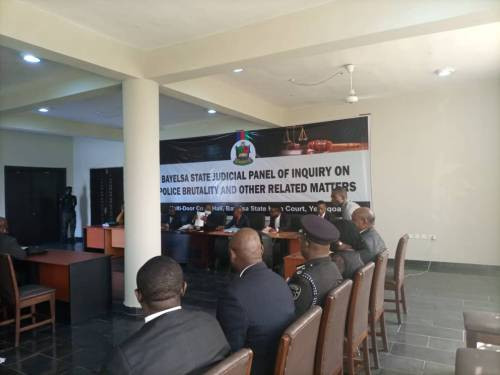 An official of the Federal Road Safety Corps (FRSC) attached to the Port Harcourt, Rivers State Command, Daniel Kokorifa, has shared the sad story of how his 17-year-old son, Innocent Kokorifa, was allegedly killed by men of the Anti-Vice Unit of the Bayelsa Police Command in August 2016. Kokorifa, who is from Okpotowarie community in the Southern Ijaw Local Government Area of the state, gave the chilling account when he appeared before the Bayelsa state Judicial Panel of Inquiry on Police Brutrality and Related Extra-Judicial killing headed by Justice Young Emmanuel Ogola. The distraught father said his child was shot in the back while running an errand. He said his son was on an adjoining street when he was killed by the police, along with his dream of becoming a lawyer.  Kokorifa, in the petition dated 4th November, 2020 numbered EAA/PI/BYS/240/2020, and through his counsel, E. A. Aluzu Esq and associates said his teenage son was shot in the back around 11.30am by a police corporal, Vincent Kohamowei, without provocation.  Another petitioner, 81-year-old grandfather, Chief Lucky Amakiri, in his petition before the judicial panel said his 19-year-old grandson, Blessing Amakiri, was shot dead by men of the state police command based on mere suspicion that he belonged to a cult group in the state. According to Amakiri, his grandson's life was cut shot by men of the Ekeki Police Division at the former Oyoyo Market in the Ovom area of the state.  Also dragging the authorities of the Bayelsa and Delta states' police commands before the judicial panel were families of two policemen shot dead on the 14th of June, 2020 in Ughelli, Delta State allegedly by men of the Federal Special Anti-Robbery Squad while on special duty alongside five other policemen.  In their separate petitions, the families of Sergeant Ondogha Oyindineni and Sgt. Philip Seikpo insisted that the mysterious killings of both men alongside five police officers in Ughelli were suspicious and without any justifiable reasons.  The families of the late Sgt. Oyindineni (F/N 47818) and Sgt. Seikpo (F/N 477880) insisted that policemen were on special duty when they were killed and without proper explanations made to the families.  The Bayelsa Judicial Panel on Police Brutality and Related Extra-Judicial Killings, after preliminary hearings and appearances made on the 18 petitions received, has adjourned to January 6th and 7th, 2021 for further hearings and appearances of witnesses. The post Police killed my son and his dream of becoming a lawyer - FRSC officer tells Bayelsa state judicial panel appeared first on Linda Ikeji Blog.