A concerned individual has alerted relevant authorities in Kano State over the the trend of drivers carrying passengers in the booths of their vehicles for trips to other states. George Onmonya Daniel made the call on Friday morning, December 4, after he spotted a woman, three children and one other passenger in the booth of a vehicle heading to Katsina state at a motor park in Kano.

"This is Rijiyar Zaki Motor Park, Kano. One thing I noticed is that the booth of the car is for human beings here. This very beautiful woman you are seeing was with a child who is about 4 months old and two sons, one looks two, the other four, sitting there with another woman who looks like a relative," he wrote. "They are no road safety or Governor Ganduje's Karota here. No police. It seems this is the usual. The recklessness and lack of human dignity for this whole thing just keeps hunting me. The driver carries two people at the front seat, four at the back and three to four inside the booth, the loads are tied on the roof of the car. On entering the vehicle you discovered that these guys have no respect for speed." "Jaafar Jaafar and Maryam Shetty you guys should look this up and inform your governor and Katsina State governor to look this up as most of the vehicles were heading into the neighbouring Katsina State. I don't know but something is really not right with this" 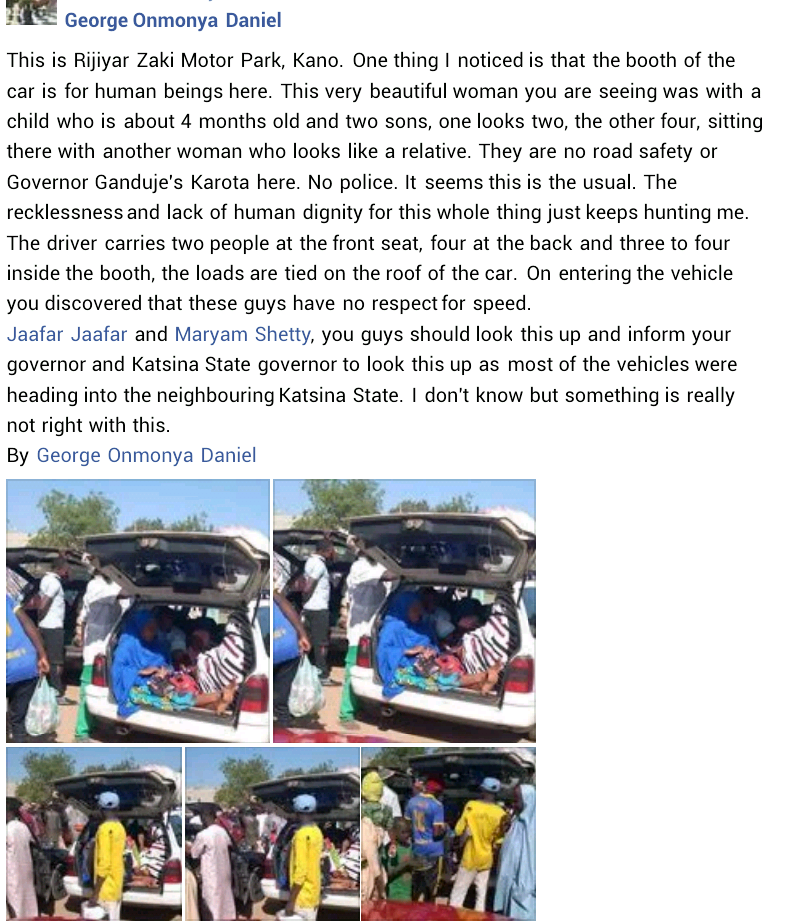 The post Man alerts Kano authorities after he spotted a Katsina-bound commercial driver carrying passengers including children in the booth of his vehicle appeared first on Linda Ikeji Blog.