The hip-hop world is mourning the loss of another legend. American musician and music journalist, Questlove, on Wednesday night, December 23, announced the death of John “Ecstasy” Fletcher from the pioneering hip-hop group Whodini. He was 56.  "This man was legendary and a pivotal member of one of the most legendary groups in hip hop," Questlove wrote in an Instagram tribute post. "This is sad man." The cause of death is not yet known. His family released a statement, confirming his death.  The African and Native American ancestors have gathered around and chosen this day, during the Winter Solstice, Dec 23rd, 2020 to call upon a most endeared, generous, and sincere soul who graced The World’s heart through performance, hip-hop, family, children and grandchildren. John "Ecstasy" Fletcher was a beloved man, the life partner to Deltonia and ex-husband to Carla, twin brother to Joseph,artist, friend, and lifetime performing partner to the Legendary Jalil of Whodini. Whodini set a Hip Hop course of legendary status that we are all sure to pass on to our grandchildren. Please send love and prayers to our family, and with open hearts we ask the ancestors to cover his soul in peace and tranquility. Play his music if it moves you, and know he'll be hearing you on his way home this day, Dec 23rd." Cards and letters can be sent to:3799 Main Street P.O. Box 87176College Park, GA 30337 Sincerely, The Family of John "Ecstacy" Fletcher Ecstasy formed Whodini with Jalil Hutchins in 1982, and would go on to recruit DJ Drew Carter, aka Grandmaster Dee, several years later. The group is considered a pioneering act within the hip-hop realm, as they were known for seamlessly fusing R&B and rap during the latter genre's early years. Between 1983 and 1996, Whodini released half a dozen studio albums and delivered a number of charted singles, such as "Magic's Wand," "Friends"/"Five Minutes of Funk," "Funky Beat," and the Halloween-themed cut "The Haunted House of Rock." "One Love’ to one of Hip Hop’s Greatest!" Hutchins said in a statement. "There will never be another." In 2018, the Brooklyn group received the Hip Hop Icon Award at the 3rd Annual Black Music Honors, where Doug E. Fresh, YoYo, Monie Love, and DJ Mell Star gave a tribute performance of Whodini's greatest hits.  Hip-hop figures and fans have taken to social media to pay tribute to Ecstasy for paving the way. 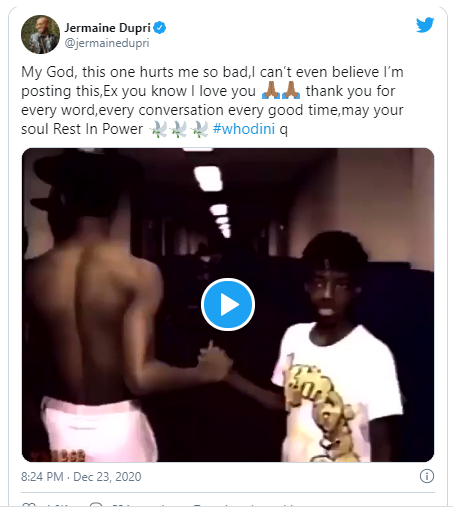 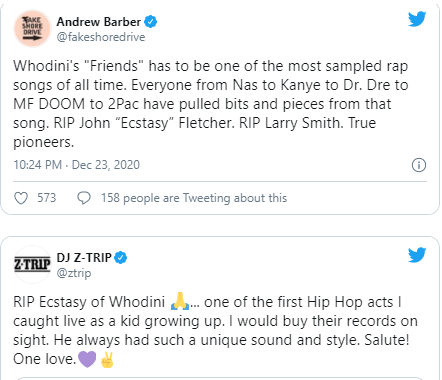