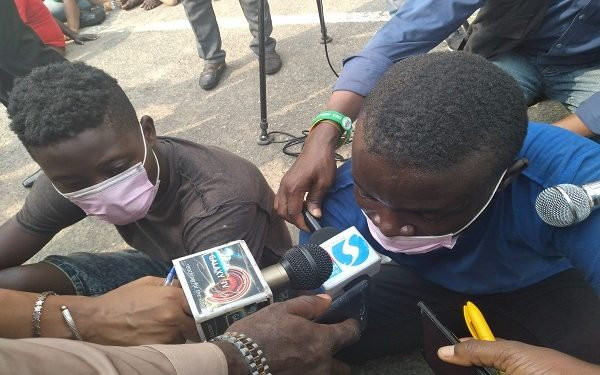 A 23-year-old student of the Federal College of Education (Technical) Akoka, Dare Williams, who was recently arrested for snatching a vehicle from a hailing service driver, has said he turned to armed robbery because he was desperate to gather enough money to pay Davido or Runtown to feature in his own album. According to police report, Williams, who is an upcoming artiste, lured his friend, Bethel Chukwuocha, 18, to snatch the Toyota Corolla car from the driver, Clement Aniegbe, on Monday night December 21. Armed with a kitchen knife, the suspects ordered a ride from Lekki to Gbagada. While on their way to their supposed destination, they threatened the driver with the weapon and then sedated him, making it easy for them to cart away his car and mobile phone. Wiliams who claimed he had gone around seeking help to raise money for his music project, said his plan was to sell the vehicle for a million naira and use the money to advance his music career. Parading the suspects before newsmen, the Lagos state Commissioner of Police (CP) Hakeem Odumosu said “They used knife and some substances suspected to sedatives to weaken the victim. The suspects claim to be students of the Federal College of Education, Yaba-Lagos.The suspected were arrested by police detectives attached to Sabo Police Station, Lagos State, on Tuesday, December 22, at Sabo while on their routine patrol. The detectives recovered the car and the knife used for the operation from them.The case is under investigation and will be transferred to the State CID for further investigation.”The post I stole to raise money to feature Davido or Runtown in my music - Suspected car thief says appeared first on Linda Ikeji Blog.