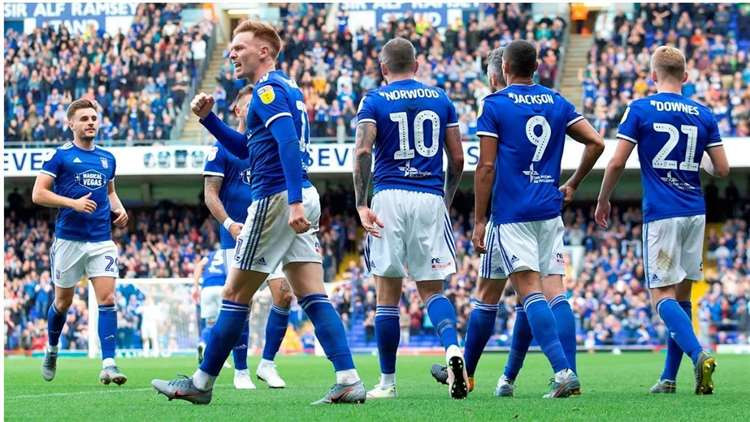 League one club, Ipswich Town have confirmed the new strain of Covid-19 has driven an outbreak within the squad after five players and two manager staff including coach Paul Lambert tested positive.  Paul Lambert and five other members of the playing staff tested positive for the virus over the weekend, which has led to the postponement of Town’s next two games, while general manager Lee O’Neill has now also returned a positive test.  The British club say the new strain of the virus, which is thought to spread more quickly, is the reason for the outbreak and believe their last game, against Burton on December 15, could be the source. The club’s lead physio, Matt Byard, is expecting further positives when the remaining members of the squad are tested again on Wednesday.  “In previous cases at clubs, the confirmatory source can normally be isolated down to a coach journey or a lengthy meeting indoors. We however, have had the same protocols in place since we started pre-season training,” Byard said.  “The players are still arriving to training in kit, training and then going straight home. No showers are in use, no canteen where they eat communally. If you consider a staged return to normal behaviour at the training ground in five phases, then we are at the beginning of phase two. “We have only had two cases here in nine months [Kayden Jackson and Matt Gill] so to get seven in one week is alarming.  “I have looked at every avenue and the only scenario for transmission has to be our match against Burton last week and because it seems to have been passed on in a matchday environment, it is confirmation of a new development. We still have stringent protocols in place in terms of use of the dressing-rooms, I might add.  “We are doing things the right way. We always have done. Players and staff deserve a great deal of credit as they adhere routinely to the guidelines and the new way of operating. This has been thoroughly supported by senior staff and executives. "It would have been very easy to allow players and staff to change in the building and have showers, especially given the change in weather. Our adherence to guidelines is still likely to have reduced potential transmission risk, even under these circumstances.  “This new strain of the virus clearly transmits far quicker than the original Covid strain and we have the data and symptom profile that confirms that is what we are dealing with here. “We have tested all the playing and coaching staff and from the results, we can detect the level of infection and see the patterns emerging, however it’s the speed of the transmission that tells us it’s the new strain. “We will be re-testing all the staff on Wednesday who have previously tested negative and I do have concerns that there will be more positive cases. It’s important to recognise the timing of testing is absolutely crucial in determining the diagnosis. A wrongly timed test can very likely produce a false result. We have to very closely determine potential transmission risks and consider the period of incubation before becoming infectious.  “We have been complimented by the EFL for the procedures we have had in place at the training ground and on matchday - and that is one of the reasons they have become very concerned over the latest developments.  “I know the EFL are looking at bringing in extra measures, with maybe more testing for example. I have always supported routine testing to secure a return to playing programme. Personally, with so many clubs affected by this presently and this new strain development, football may benefit from a ‘circuit breaker’ before a return to playing securely.”  Town have now closed their training ground and told players and staff to stay away following the positive tests at the club.The post Five players and two management staff at Ipswich Town football club test positive for new coronavirus strain appeared first on Linda Ikeji Blog.