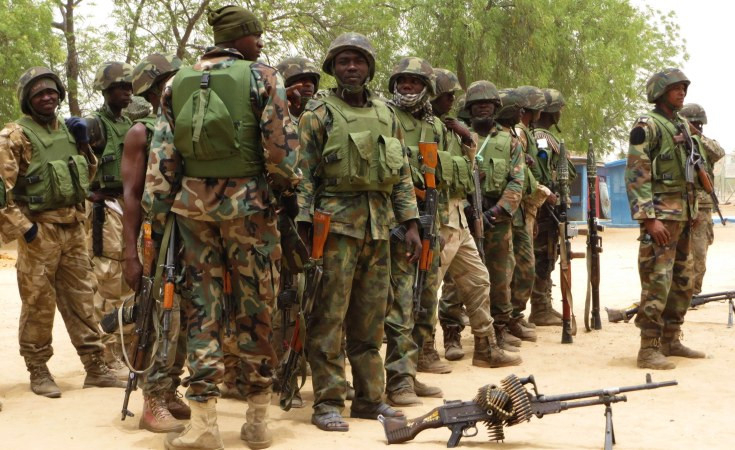 Personnel of the Nigerian Army Four Special Forces Command have arrested and paraded suspected criminals comprising of kidnappers, bandits, armed robbers, gunrunners, bandit collaborators, and informants.  The Commander, Major General Moundhey Gadzama Ali who paraded the suspects at the command’s headquarters at Doma Local Government Area of Nasarawa state on Wednesday December 23, said they carried out operations in the North West, North East, and North Central, South-South, South West regions of the country after receiving credible information which led to the rest of several bandits and the killing of some gun runners. Among the suspects are 41 members of gang founded by late Benue militia leader, Terwase alias Gana, which also included his Chief Priest, Ugba Iorlumun. Ali said;  “We have operated in Borno, Yobe, Benue, Nasarawa, Kogi, Niger amongst other places. In Benue, we have arrested the Chief Priest of the late Criminal Terwase alias Gana, one of his men called ‘ Commander’s among others and razed the Shrine. While another criminal, Paul Duguma died in Katsina-Ala. “In Niger State, Special Forces with 31 Artillery and the Nigerian Airforce, we neutralized kidnappers, destroyed the dens of Alhaji Damina, while the kidnappers killed each other due to rivalry between the camps of Alhaji Kawuwajo and Zagalo in Kamfanin Wayo, a boundary Village between Niger and Kaduna State.” The commander further disclosed that seven personnel were killed during Operation Nut Cracker II, carried out in Kamfanin Bobi, Mariga Local Government Area of Niger State. Nine bandits were also killed in the operation.  Ali added;   “I want to assure you that we will continue to do our best to ensure the safety of all law-abiding citizens of this great nation.“I urge all law-abiding citizens not to be intimidated by these criminals in providing actionable intelligence that will help the command to rid these troubled areas of bandits, terrorists, and their collaborators.” The post Army arrests 66 suspects, loses 7 personnel in Niger appeared first on Linda Ikeji Blog.