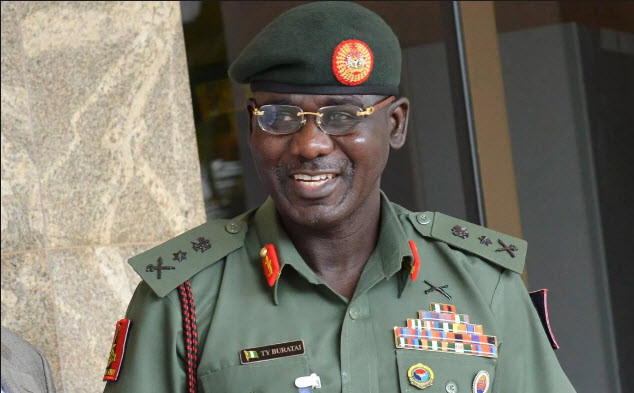 About 20 Generals have reportedly tested positive for COVID-19, one week after the death of the General Officer Commanding, 6 Division, Port-Harcourt, Rivers State, Maj. Gen. John Irefin from complications arising from the disease.  The infected Generals reportedly had a contact with the deceased during the Chief of Army Staff’s annual conference 2020, in Abuja which was cancelled after the death of Irefin.  The conference was attended by the Chief of Army Staff, Lt. Gen. Tukur Buratai, pictured above; the Minister of Defence, Bashir Magashi; and GOCs from nearly all the army divisions nationwide. They were all directed to go isolation thereafter, leading to the COAS not being able to attend the wedding of his son in Abuja on Friday December 11.  Punch reported that some of the infected GOCs and principal officers were being treated at the COVID-19 isolation centre, University of Abuja Teaching Hospital, Gwagwalada, Abuja. Some of the patients were also being quarantined at other isolation centres in the Federal Capital Territory. A source who confirmed the development which has reportedly triggered panic among top military brass who are yet to take the COVID-19 test, told the publication; “The report is true; I know about four generals who returned positive and are being treated for the disease.”The post 20 Nigerian Generals test positive for Coronavirus appeared first on Linda Ikeji Blog.