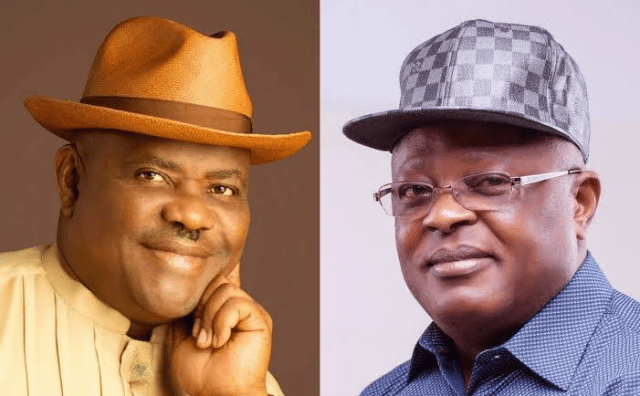 Ebonyi state governor, Dave Umahi, has described his Rivers state counterpart, Nyesom Wike, as a “dictator” who “remote-controls” the Peoples Democratic Party (PDP). Umahi on Tuesday, November 17, formally announced his defection from the PDP to the APC. Shortly after his defection, Governor Wike while speaking to newsmen, accused Umahi of defecting to the APC because of his 2023 presidential aspiration. “My friend, Umahi, wants to be president. There is no problem about that. You have a right to be president. Nobody can stop you.  You are educated. You have been a governor for two terms, so you are qualified to say I want to be president of Nigeria. But that does not mean that you have to blackmail your party, and tell lies to the people you are leaving the party because of the injustice  meted against the south-east. That is not correct,” Governor Wike had said. However, in an interview on Arise TV on Wednesday, November 18, Governor Umahi dismissed Wike's claim while describing him as a dictator. “I refuse to join issues with Wike because he is my friend. But Wike must know that he is a dictator. Wike must know that one person cannot be called a crowd. Wike must know that a lot of governors in PDP are not very happy with him. He remote-controls the party.He (Wike) said that I made my brother the vice-chairman. I fund the PDP South-East from A to Z. And he has forgotten that he singlehandedly made Secondus the (PDP) chairman. He has forgotten that he wanted to impose one of his own as minority leader of the house.There is nothing that happens in PDP without his authorisation. He once said that PDP national working committee members are beggars and bribe takers. I have asked him that let’s not take on ourselves or else it will be very dangerous.So, let’s us face the party. The party does not belong to him. And this is by no means personal, and he is demonstrating the dictatorial tendencies in him by taking on me, a fellow governor. And that is very shameful.” He alleged that more governors will leave the PDP, if Wike does not stop his attitude“APC does more consultation. Anybody can contravene this that PDP working committee is being remote-controlled and that is the truth and it is very dangerous and all the governors know that,” Umahi saidYou (Wike) cannot stay in your state and you will be remote-controlling what happens in other states. Unless that changes, you will see a lot of governors leaving the party.” he saidThe post ''Wike is a dictator''- Gov Dave Umahi says appeared first on Linda Ikeji Blog.