Whether Trump concedes or not it is not relevant, Biden has won the election and is going to be inaugurated - Bernie Sanders 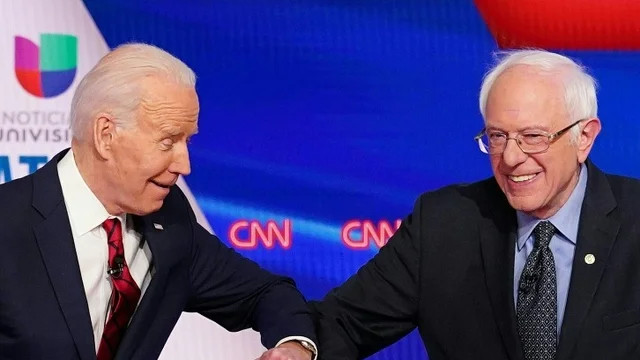 Sen. Bernie Sanders has congratulated President-elect Joe Biden and Vice President-elect Kamala Harris on their election victory on Saturday November 7. Appearing on CNN after the projection of the Democratic candidates as winners of the presidential election, the senator who contested in the Democratic primaries alongside Biden and Harris stated that Trump's insistence on not conceding is irrelevant.  Bernie said;  “Whether Trump concedes or not, is not relevant. Biden has won the election, he’s going to be inaugurated. We remain a country that believes in a constitution. “I don’t envy Joe Biden in terms of the enormous, enormous challenges he faces… our job right now is to bring people together around an agenda that works for all people.“This election was about whether or not we remain a country that believes in the constitution, that believes in the rule of law and that believes in democracy. And thank God, democracy won out.” Bernie also congratulated everyone who worked to ensure Biden's win possible. He tweeted;  I want to congratulate all those who worked so hard to make this historic day possible. Now, through our continued grassroots organizing, let us create a government that works for ALL and not the few. Let us create a nation built on justice, not greed and bigotry.

Sanders was Biden's final opponent during the Democratic primary earlier this year, outlasting the over 20 other candidates who joined the fight for the 2020 presidential nomination. Recall also that while Trump has consistently rejected the victory of Biden and also filed multiple lawsuits to challenge the election, his personal lawyer, Rudy Giuliani had earlier said his client will not concede the election.The post Whether Trump concedes or not it is not relevant, Biden has won the election and is going to be inaugurated - Bernie Sanders appeared first on Linda Ikeji Blog.