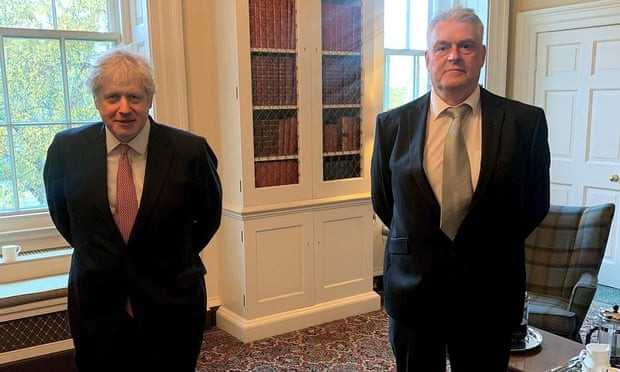 U.K. Prime Minister, Boris Johnson, who was hospitalized in the spring for coronavirus, is now self-isolating again after he was exposed to a Member of Parliament (pictured right) who has tested positive for the virus.  Concerns were raised that Covid-19 had returned to Downing Street following a 35-minute meeting between the prime minister and a group of Tory MPs, with one of them later testing positive for the virus.  During the meeting, Mr. Johnson was pictured standing next to Lee Anderson, MP for Ashfield in Nottinghamshire, inside Downing Street on Thursday. The men who both weren't wearing masks appear to be less than 2 metres apart.  Lee Anderson was later diagnosed with COVID-19. The prime minister said on Sunday night November 15, that he had been notified by NHS Test and Trace that he has to self-isolate after getting in contact with someone who has tested positive. Mr Johnson tweeted: "I have no symptoms, but am following the rules and will be working from No 10 as I continue to lead the government's pandemic response." A No 10 spokesperson said in a statement: “The prime minister will follow the rules and is self-isolating. He will carry on working from Downing Street, including on leading the government’s response to the coronavirus pandemic. The PM is well and does not have any symptoms of Covid-19.” Boris Johnson spent three nights in intensive care at St Thomas' Hospital in central London in April after testing positive for COVID-19 on 27 March.The post UK Prime Minister Boris Johnson forced to self-isolate again after getting exposed to a Member of Parliament who contracted COVID-19 appeared first on Linda Ikeji Blog.