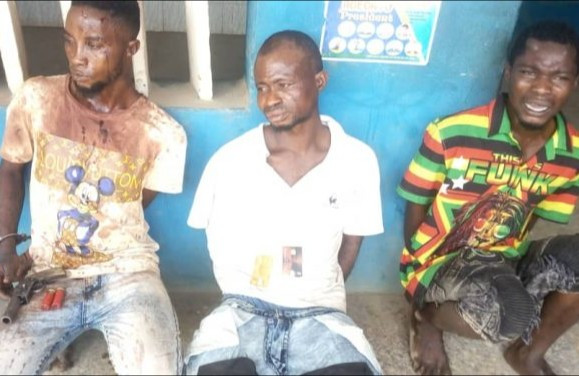 Operatives of the Ogun State Police Command have arrested three members of robbery gang who have been terrorising Iju Ota and its environ. The suspects, identified as Bamidele Oluwashina, 31; Adebowale Kehinde, 32; and Oluwasegun Abayomi, were arrested following a distress call received by the police at Onipanu Divisional Headquarters at about 9:30pm on November 12, 2020 that robbers had invaded Iju Love Bus Stop and tipper garage, wielding dangerous weapons and dispossessing people of their valuables. Upon the distress call, the Divisional Police Officer of Onipanu Division, Chief Superintendent of Police Bamidele Ishola Job, was said to have mobilized his patrol team to the scene and engaged the robbers in a gun duel. Having realised the superior fire power of the police, the hoodlums took to their heels, but one of them was arrested at the scene, a statement on Sunday by the spokesman of the Ogun State Police Command, Abimbola Oyeyemi, said. The entire area was cordoned off, while police intensified searched for other members of the gang. Oyeyemi said with the help of members of the community, two other members of the gang were sighted trying to escape in a tricycle and they were promptly arrested. One Tosin Ajayi, who was macheted on the head by the robbers, was taken to the hospital by the police for medical treatment. One cut to size locally made pistol and two live cartridges were recovered from them. The Command’s Commissioner, Edward Awolowo Ajogun, has ordered the transfer of the suspects to State Criminal Investigation and Intelligence Department for discreet investigation. Ajogun also appealed to the general public not to allow cultism to fester in their area as cultists were associated with all forms of violent crime. He also assured the people of the state that the Command’s Violent Crime Intervention Squad was battle ready to combat any violent crime across the state.The post Three suspects arrested during robbery operation in Ogun state appeared first on Linda Ikeji Blog.