Outrage as #EndSARS frontliner is prevented from leaving the country and her passport seized; Oby Ezekwesili, Lala Akindoju and others react 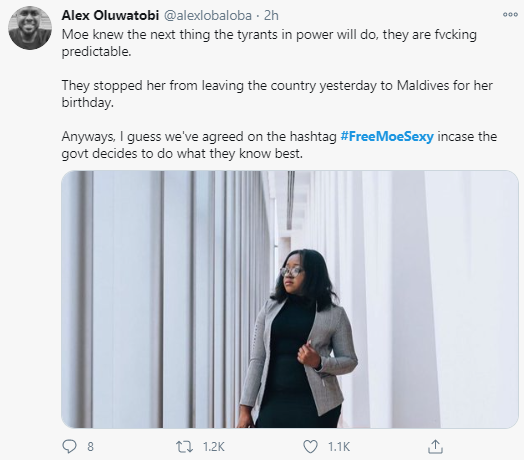 Modupe "Moe" Odele, one of the members of the Feminist Coalition who provided support to protesters during the End SARS protests, was prevented from leaving the country and her passport seized. Moe celebrated her birthday yesterday, November 2. Ahead of her birthday, she attempted travelling to the Maldives on Sunday, November 1, but an intelligence agency in Nigeria prevented her from travelling and seized her passport. When Nigerians got wind of this, they began trending the hashtag #FreeMoeSexy. "Passport" is also one of the trending topics on Twitter as Nigerians are calling on the government to release her passport. 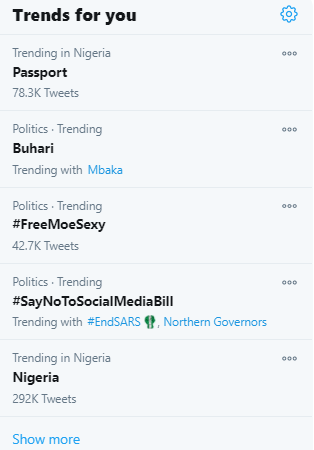 Prior to this incident, there had been claims that members of the Feminist Coalition were being threatened and efforts were being made to arrest them for their part in the End SARS protests. Commenting on this, Moe had taken to Twitter at the time to say that if such happens, Nigerians should use an interesting hashtag like #FreeMoeSexy to demand her release, hence the current trending hashtag. After it was made public that Moe was prevented from leaving the country, Twitter users expressed outrage and asked if we are now in a police state. Confirming the development in a newsletter sent out on Monday, November 2, Modupe said she was on her way to the Maldives to celebrate her birthday when she was accosted by immigration officers. She wrote: For my birthday, I had planned a trip to the Maldives. It was really for a break as the events of the last three weeks have exhausted my mind and body in a way I have never been exhausted in my life.I went to the airport, passed through immigration, and while I was putting my bags through the body and baggage scanner, the immigration officer who had previously cleared me, called me back. He told me he had orders from above to detain me.Okay, at this point I’m like excuse me, my flight is in an hour. On what grounds are you detaining me? He didn’t respond. Instead, he goes to his computer where he typed in my name and something that looked like a ‘wanted poster’ popped up on the portal.He blocked my view so I couldn’t see most of it but I saw some of it. And it read something like – ‘This person is under investigation by XYZ Intelligence Agency. If seen, they should be apprehended on sight.' Modupe Odele said she was detained while her passport was seized by the officers and she was made to miss her flight. Oby Ezekwesili and actress Lala Akindoju reacted by questioning the government for taking such action. Though the intelligence agency that seized Moe's passport was not named by Moe, Ms Ezekwesili named the SSS. She added that she has written to the National Security Adviser to "immediately retrieve the passport of Modupe Odele from the State Security Service." 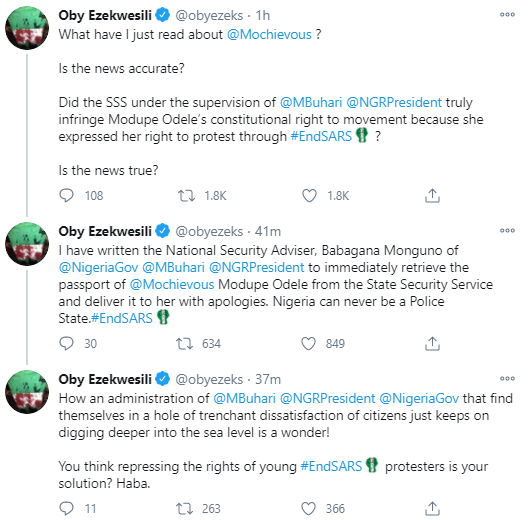 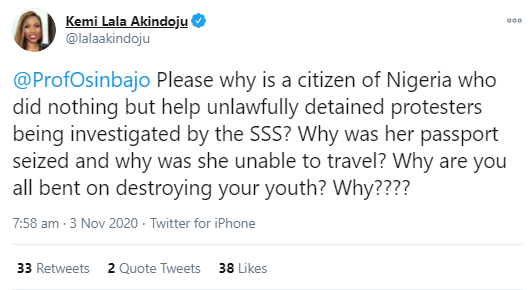 Meanwhile, Moe has reacted. She said she has been invited back with her lawyers today, November 3, She tweeted: "Hello everyone. Thank you so much. I’m fine and I’m safe. We haven’t confirmed yet why I was stopped on Sunday or by whom. But I’ve been invited back in with my lawyers today. I’ll update when I have more information but please don’t spread false news. That is dangerous." 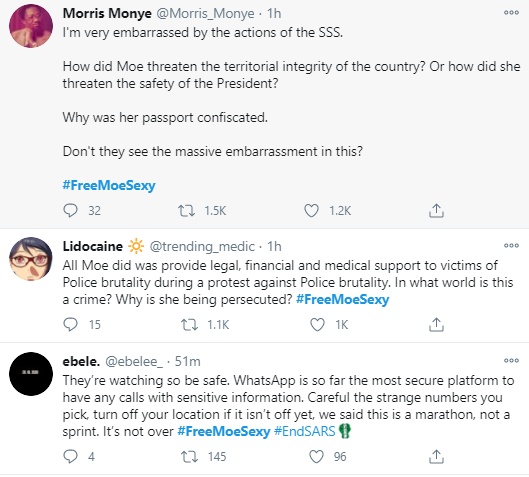 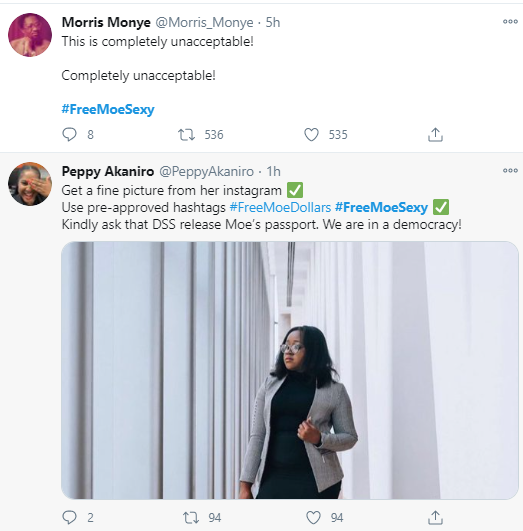 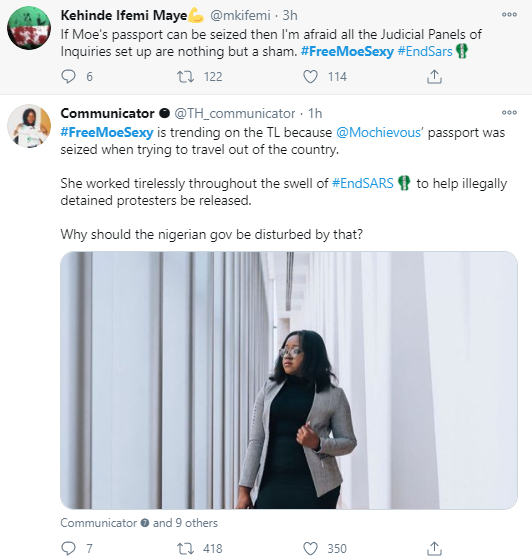 The post Outrage as #EndSARS frontliner is prevented from leaving the country and her passport seized; Oby Ezekwesili, Lala Akindoju and others react appeared first on Linda Ikeji Blog.