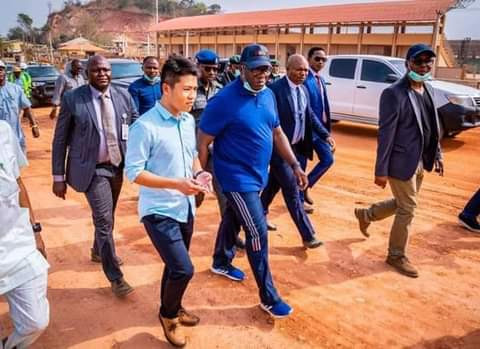 Governor Fayemi on inspection tour of the new Iyin Road, Ado-Ekiti earlier this yearGunmen suspected to be kidnappers on Friday killed a policeman and kidnapped a Chinese handling the new Iyin Road in Edo-Ekiti, Ekiti State. It was gathered that the gunmen attacked two Chinese nationals in the Ado-Ekiti end of the new road on Friday evening, November 27, and shot dead the policeman in their entourage. While one of the expatriates was abducted, the other was said to have sustained gunshots injuries. Spokesperson of the Ekiti State Police Command, ASP Sunday Abutu, who confirmed the incident, said operatives are combing the forest to ensure the safe rescue of the expatriate."It’s confirmed that a kidnapping incident occurred today at about 4:30 pm along new Ado-Iyin road where one civilian was kidnapped, one shot while one policeman was shot dead. Our operatives are already combing the forest for possible apprehension of the perpetrators.” he said. "The Ekiti State Commissioner of Police, Tunde Mobayo, enjoins everyone to be calm and avoid any form of apprehension as the Command will do everything possible to rescue the victim and arrest the culprits." he added. The post Gunmen kill policeman, abduct Chinese expatriate in Ekiti appeared first on Linda Ikeji Blog.