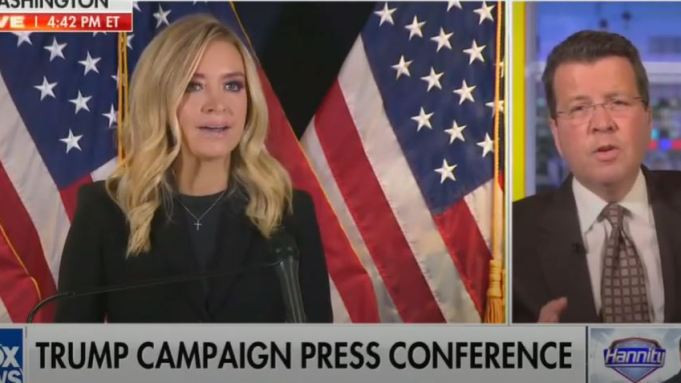 Fox News has cut away from a briefing held by the White House press secretary, Kayleigh McEnany during which she repeated Donald Trump’s refusal to accept defeat in the presidential election and doubled down on allegations of voter fraud without presenting any evidence.  McEnany who said she was speaking in her “personal capacity” during “a campaign event” at the Republican National Committee headquarters on Monday night, said Republicans want “every legal vote to be counted and every illegal vote to be discarded”, prompting the conservative Fox News network to stop broadcasting the briefing. From the studio, host Neil Cavuto said; “Whoa, whoa, whoa – I just think we have to be very clear. She’s charging the other side as welcoming fraud and welcoming illegal voting. Unless she has more details to back that up, I can’t in good countenance continue to show you this."I want to make sure that maybe they do have something to back that up, but that’s an explosive charge to make, that the other side is effectively rigging and cheating. If she does bring proof of that, of course we’ll take you back. So far she has started saying, right at the outset – ‘welcoming fraud, welcoming illegal voting’. Not so fast.”      View this post on Instagram           A post shared by Lindaikejiblog (@lindaikejiblogofficial) on Nov 10, 2020 at 11:50pm PST This is coming after Washington Post reported that the Rupert Murdoch-owned Fox News has shifted away from its loyalty to Trump over the past week.  Independent also reported that Cavuto is a well-known Trump sceptic. His scepticism is so well-known, that he was the subject of a rant by the current president during a rally in Colorado Springs earlier this year. Cavuto, who specialises in business reporting, is not in the same mould of the primetime Fox News opinion-spouters like Laura Ingraham and Sean Hannity.   The post Fox News cuts off President Trump's Press Secretary, Kayleigh McEnany over 'false claim' about the US Presidential election (video) appeared first on Linda Ikeji Blog.