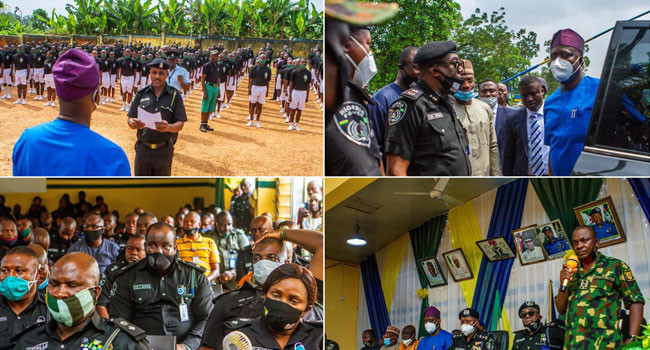 Governor Seyi Makinde on Monday November 2, announced that the Oyo state government will be compensating families of Policemen who lost their lives during the peaceful #EndSARS protests which was hijacked by hoodlums.  The Oyo state Governor said this while speaking at the Oyo State Headquarters of the Nigeria Police Force, Eleyele, Ibadan.  Makinde who disclosed that N500 million fund has already been set aside to compensate victims of police brutality and injustice, commiserated with officers and men of the Police Command over the loss of their officers as well as the destruction of a number of structures and equipment. The Governor stated that government will continue to work together with the force to make Oyo State safe and secure for residents, and further urged the Police to put the experience of the last few weeks behind them and join hands with the government to rebuild the nation and create a better society. He also disclosed that the state government would undertake the rebuilding of all burnt down and destroyed stations as well as take care of all logistics as contained in a document presented to him by the Commissioner of Police, Mr. Joe Enwowu.  Makinde said;   “I announced that the government has set up an initial N500m Victim Compensation Fund. I made the announcement last week and I want to say that the families of the policemen in Oyo State who were extrajudicially killed will be part of those to be compensated in the fund. And I also want to say that may the souls of the departed colleagues rest in peace.“The Police are a very important part of our community. My prayer is that things will get better with our country, state, and Nigerian Police Force.“Things will get better with Oyo State Police Command and it will get better with us as individuals. I can stand before you to say that not every member of the Police is bad. So, the government and the people of Oyo State are with you.“If we work together to create a better society, you also are coming to enjoy that better society. We must all join hands to make our society better.“It is time to put everything that has happened behind us and work towards nation-building. That I said I support the protest does not mean I am against you. I am for the protection of everyone’s rights including the right of the officers and men of the Nigerian Police Force.“So, we need your cooperation to ensure that arsonists, anarchists are brought to book. And I am here to work with you to make the burden you are carrying very light.”The post #EndSARS protest: We will compensate families of slain policemen - Governor Makinde appeared first on Linda Ikeji Blog.