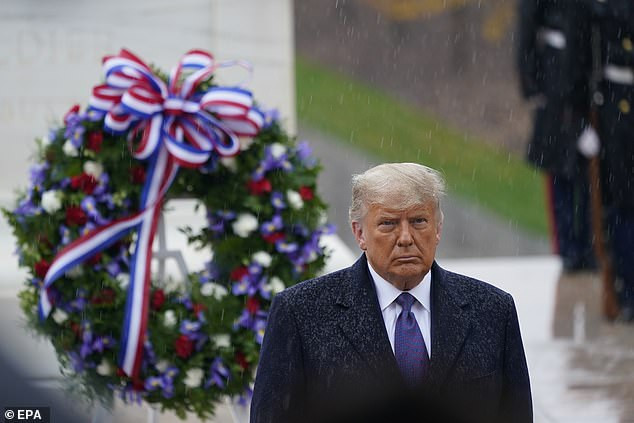 Donald Trump has launched a further attack on the election results, claiming he easily won both Pennsylvania and Michigan after the two states flipped blue for Democrat Joe Biden last week.  Recall Pennsylvania was called for Biden on Saturday and its 20 electoral college votes pushed him over the 270 college vote margin to victory.  The president tweeted on Wednesday November 11and also alleged that GOP poll watchers were prevented from observing ballot counting in Pennsylvania and Michigan where 'hundreds of thousands of votes' should be thrown out.  In one tweet, the Republican politician said the recent presidential polls are 'fake just like much of the lamestream media.'

According to reports, Trump has filed lawsuits to stop both Michigan and Pennsylvania from certifying the election results over unfounded claims of voter fraud.   In Pennsylvania, his campaign has filed at least 15 legal challenges, including allegations that poll watchers weren't allowed 'close enough' to watch vote-counting in Philadelphia. The post Donald Trump claims he won in Pennsylvania and Michigan as he continues to launch further attack on the election result appeared first on Linda Ikeji Blog.