BBNaija star, Laycon can't take his eyes off Erica as she shows up at Dorathyâ€™s 25th Birthday party (video) 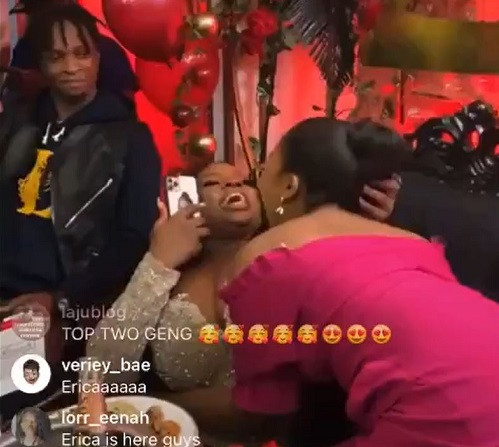 Big Brother Naija star, Dorathy Bachor celebrated her 25th birthday party on Wednesday night, November 4th with some of her fellow ex-housemates including die-hard fans and friends in attendance.  At the event, Dorathy was handed a key to a Mercedes Benz car as birthday gift from her fans. See previous report and video here.  A video from the event is now making rounds on social media. It shows the moment Erica arrived at the party and walked up to Dorathy to exchange pleasantries as Laycon stood close to them. Whilst greeting the celebrant and commanding attention from cheering guests at the party, Laycon was spotted staring at Erica in 'admiration.'      View this post on Instagram           A post shared by Lindaikejiblog (@lindaikejiblogofficial) on Nov 4, 2020 at 1:14pm PST Recall the Big Brother Naija season five winner had a crush on Erica while they were in the house, and also spoke to their housemates about his affection for her on several occasions after they became close. However, Erica, on the other hand, only wanted him as a friend as she was attracted to him 'mentally' and not 'physically.' The situation between the pair later transgressed into an altercation, which led to the disqualification of Erica from the Big Brother Naija show.     The post BBNaija star, Laycon can't take his eyes off Erica as she shows up at Dorathys 25th Birthday party (video) appeared first on Linda Ikeji Blog.