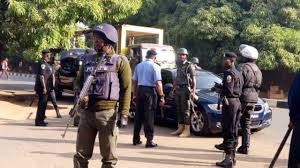 A 19-year-old boy, Maduabuchi Okeke, died during a sex romp at a hotel in the Surulere area of the state. According to SaharaReporters, a police report claims that Okeke took the sex worker simply identified as Sandra to Exclusive Mansion Hotel on Ayilara Street in the area for the night and that while they were having sex, Okeke ''died on top of Sandra''. According to the report, when Sandra discovered that Okeke had died during the sex romp, she sneaked out and allegedly contacted two security men in the hotel identified as Ottah Nduka and Aliu Tiwalola, to smuggle the corpse out of the premises. The police report reads  "One Maduabuchi Okeke, aged 19, died on top of one Sandra (other name withheld) who is a prostitute at Exclusive Mansion Hotel. Two security men in the hotel smuggled the corpse from the hotel and placed the deceased on one Ejike NasoNaso's legs. They threatened to kill Naso if he told anybody how the deceased died.Meanwhile, the prostitute and the two security men have been arrested to know the real cause of his death before his corpse would be released to his family for burial."The post 19 year old boy dies during intercourse with sex worker in Lagos appeared first on Linda Ikeji Blog.