The current state of the Nigerian youths is unbearable and intolerable, those speaking up against me are advertising me - Fr. Mbaka speaks on #EndSARS protest (video) 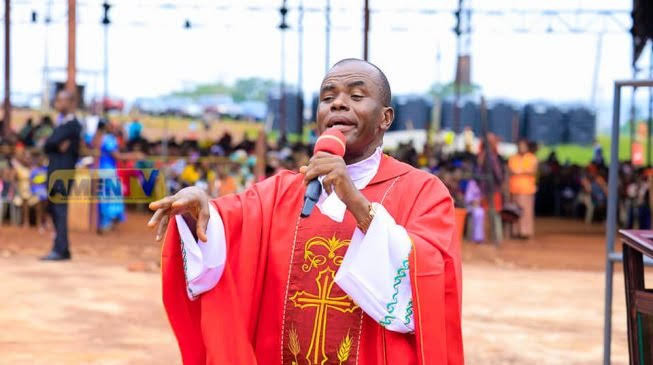 Rev. Fr. Ejike Mbaka has commented on the #EndSARS protest which is currently ongoing across states in the country.  The Enugu-based priest averred that the current state of the Nigerian youths is unbearable and intolerable. He also absolved the Buhari-led adminsitration of any blame by saying that the chaos in the country started before him.  Mbaka who stated that the disbandment of SARS will not stop the issue in the country, also commended youths who are fighting for their future but warned against politicising the protest.  He noted that there are many things to end in Nigeria including the electoral system. The cleric who decried the continous unemployment rate in the country, also pointed out that federal lawmakers are going home with "bags of money". He further noted there are many people who can turn around the fortunes of the country.  Mbaka who also took a swipe at those attacking him for saying that God told him that Buhari will be Nigeria's President, stated that he can't disobey God when he speaks to him. He added that he doesn't speak out of presumption but from clear visions from God.  The cleric also averred that those speaking up against him are "advertising him".  Here is the video below;       View this post on Instagram           A post shared by Lindaikejiblog (@lindaikejiblogofficial) on Oct 20, 2020 at 10:50pm PDTThe post The current state of the Nigerian youths is unbearable and intolerable, those speaking up against me are advertising me - Fr. Mbaka speaks on #EndSARS protest (video) appeared first on Linda Ikeji Blog.