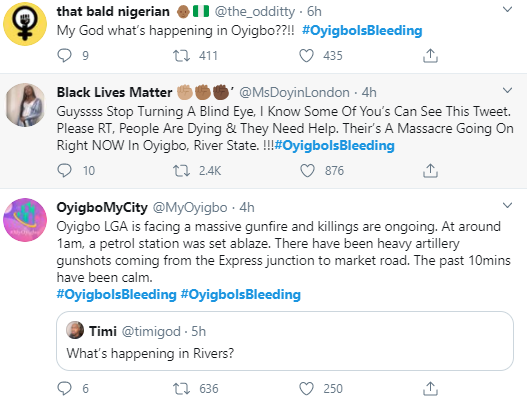 Residents of Oyigbo in Rivers State, Port Harcourt, took to Twitter all through the night to cry out for help, revealing they are under attack. Reports from multiple residents stated unknown armed men were going from house to house, attacking people.  They explained that they anticipated the attack as there had been a huge fight in the day time and threats were made. Graphic videos of the fight that started on Wednesday, October 21, were shared online. Also, videos of last night's chaos were shared by residents. The videos do not show much but gunshots can be heard ringing out as panicked people documented what was going on with the hashtag #OyigboIsBleeding. They also called out the rest of Nigeria for keeping silent while they get attacked. See some tweets below.

The post #OyigboIsBleeding trends as residents cry out that unknown armed men have been breaking into people's homes and attacking them appeared first on Linda Ikeji Blog.