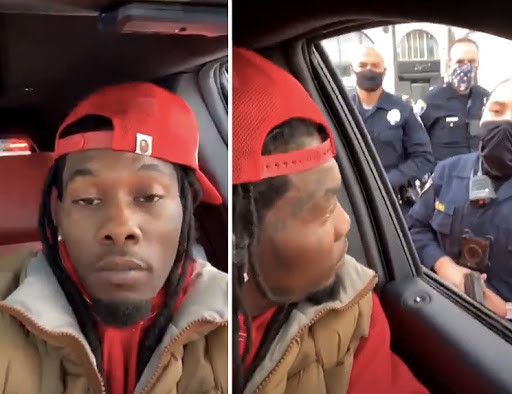 Migos' Offset was detained on Saturday October 24, in Beverly Hills following an incident which reportedly involved Trump supporters who were marching in the area. Although video shows rapper Offset, née Kiari Kendrell Cephus being pulled out from his vehicle by policemen, authorities say he was not arrested, reversing course after earlier confirming the arrest. In a clip shared online, an officer can be heard asking him to step out of the vehicle. "I'm not doing that, I'm not doing that. Because you've got guns out," Offset says, with the officer replying, "That's my choice." "I'm not going to move my hands from my steering wheel," Offset then says, as a female officer tells him that they were told that he was "waving guns." "You know who I am? Offset from the Migos. They got fans, that's why they're following me," the rapper replies. However, the female officer states, "That has nothing to do with why we're here. We were told that you guys were waving guns at people." Offset then claims that they "watched somebody beat my car up with a flag."      View this post on Instagram           A post shared by Lindaikejiblog (@lindaikejiblogofficial) on Oct 25, 2020 at 12:56am PDT An eyewitness who was at the scene also posted video of Offset outside of his car with the officers holding him. A crowd can be seen with some holding Trump flags. Shit crazy offset @OffsetYRN pic.twitter.com/Lx98O8nw2Z— yababymamafav (@Yg__willie) October 25, 2020 Beverly Hills Police Department later released a statement regarding the incident, confirming that Offset was not arrested. However, another man who he was with, named Marcelo Almanzar, was arrested for carrying a concealed weapon and carrying a loaded firearm in public. Almanzar is Cardi B's cousin. The police statement read;  “On 10/24/2020, at approximately 5:02PM, Beverly Hills Police received information from a passerby of a subject who pointed a weapon from a vehicle at him; in the area of South Santa Monica Blvd and N. Beverly Drive. The passerby provided a license plate to the vehicle, and the vehicle was stopped by patrol units a short distance away.  After the on scene investigation, the passenger in the vehicle was arrested.  The victim of the crime did not desire to press charges for the pointing of the weapon.” BHPD Statement on 10/24/2020 Arrest: pic.twitter.com/MQS7B6Rvav— Beverly Hills Police (@BeverlyHillsPD) October 25, 2020 Marcelo Almanzar's bail has been set for $35,000.The post Offset detained in the middle of his Instagram live after run-in with Trump supporters (video) appeared first on Linda Ikeji Blog.