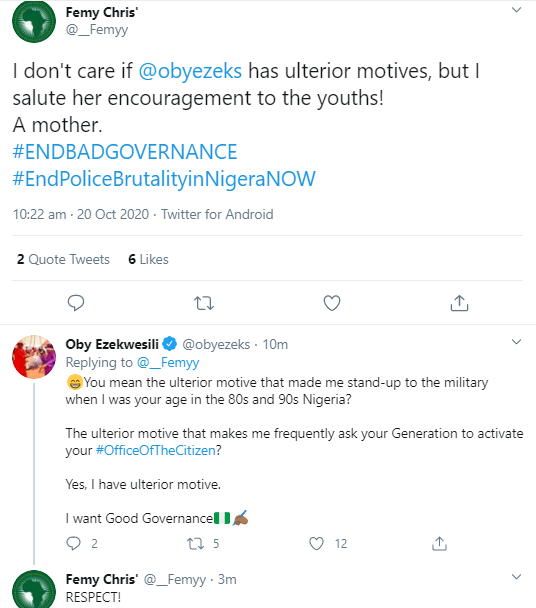 Oby Ezekwesili has responded to insinuations her advocacy has an ulterior motive. The former Minister of Education, who was later appointed Vice President for the World Bank's Africa Region, has been openly supporting the End SARS protests. She is not new to protests, having staged multiple Bring Back Our Girls protests, demanding the abducted Chibok schoolgirls and released to their families. As she lent her voice to the End SARS protest, some began insinuating she may have ulterior motives. A Twitter user wrote: "I don't care if @obyezeks has ulterior motives, but I salute her encouragement to the youths! A mother." And Oby Ezekwesili responded: "You mean the ulterior motive that made me stand-up to the military when I was your age in the 80s and 90s Nigeria? The ulterior motive that makes me frequently ask your Generation to activate your #OfficeOfTheCitizen? Yes, I have ulterior motive. I want Good Governance." 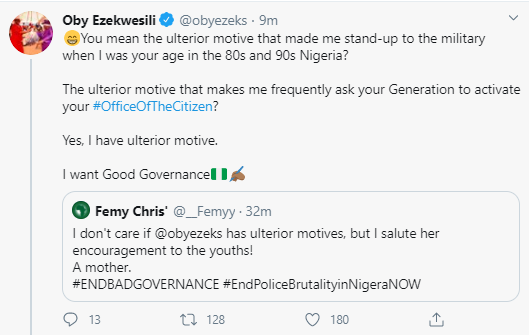 The post Oby Ezekwesili responds to insinuations of having ulterior motives for her #ENDSARS advocacy appeared first on Linda Ikeji Blog.