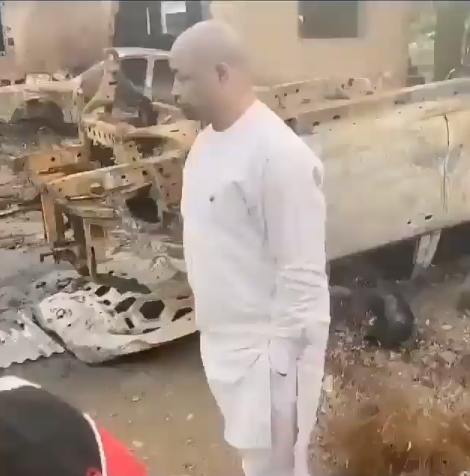 Musiliu Akinsanya popularly known as MC Oluomo has visited the Makinde Police Station in Oshodi which was one of the police stations burnt in the wake of the #EndSARS crisis.  The Chairman of the Lagos state chapter of the National Union of Road Transport Workers (NURTW), inspected the burnt police station with some of his comrades.  Recall that the Lagos state government had said that "twenty-nine Divisional Police Stations and 17 Police Posts were razed by hoodlums disguising as protesters. Also, six police officers were lynched, 36 critically injured, while 71 police operational vehicles were torched." Watch the video below...      View this post on Instagram         MC Oluomo, the Chairman of Lagos state chapter of National Union of Road Transport Workers (NURTW) inspects burnt Makinde Police station in Oshodi.A post shared by Lindaikejiblog (@lindaikejiblogofficial) on Oct 29, 2020 at 11:26pm PDTThe post MC Oluomo inspects burnt police station in Oshodi (video) appeared first on Linda Ikeji Blog.