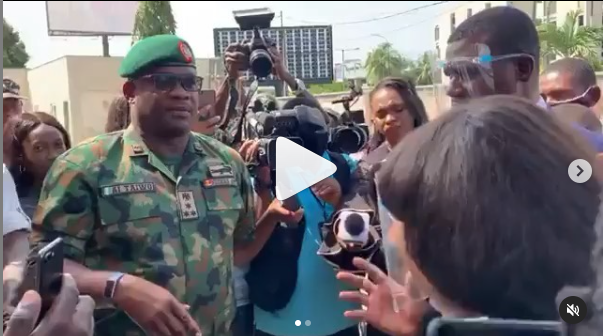 The military morgue which members of the Lagos State Judicial Panel of Inquiry for Restitution for Victims of SARS and related abuses and Other Matters were initially denied access into as part of the ongoing investigation into the Lekki shootings, has been found to be undergoing some renovation.  Recall that the panel led by its chairman, Justice Doris Okuwobi (retd.) were initially denied access to the hospital for about 30 minutes before they were allowed into the premises. Daily Trust has now reported that military officials told the panel that the morgue has been under renovation since late 2019. It was gathered that Brigadier General AI Taiwo and Colonel G.S Ogoh took the panel to the morgue where the ongoing renovation was confirmed. This is coming after a member of the panel, Mr. Ebun Adegboruwa (SAN) said they got an impromptu confidential information that the facility at the hospital may be relevant to its investigation. He said the panel is interested in visiting the morgue to assess bodies in the facility. The panel however left the facility after a brief discussion between a senior military officer and Justice Okuwobi (Rtd) without entertaining questions from journalists. Here is the video below;      View this post on Instagram           A post shared by Lindaikejiblog (@lindaikejiblogofficial) on Oct 31, 2020 at 12:28am PDTThe post Lekki shootings: Military morgue is undergoing renovation Officials (videos ) appeared first on Linda Ikeji Blog.