#EndSARS protest: I'm not afraid for my life, I could easily get killed by something else in Nigeria - Falz says in interview with CNN's Christiane Amanpour (video) 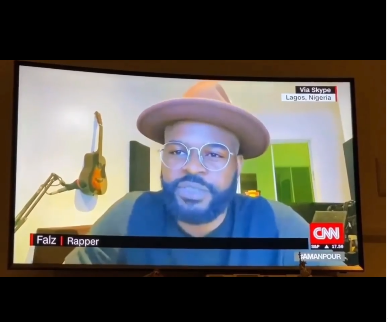 Nigerian singer, Falz got interviewed by CNN's Christiane Amanpour about the #EndSARS protest today October 21.  The singer who gave an overview of why SARS was created, also outlined the grieviances of the Nigerian youths against the controversial police unit which is centered on "profiling". Falz further pointed out that the major issue surrounding the disbandment of the police, is that same claims have been made continously over the years.  The frontliner of the #EndSARS protesters who was also asked if he's afraid to die like others who are scared to speak in front of the camera, stated that he isn't. According to Falz, he can easily get killed by other things in Nigeria which includes; unemployment, poor health care system and  bad roads.  Falz added that it is disheartening that the Nigerian government is dragging its feet in implementing some of the reforms it claims it's leading.  Watch the video;       View this post on Instagram           A post shared by Lindaikejiblog (@lindaikejiblogofficial) on Oct 22, 2020 at 4:37pm PDTThe post #EndSARS protest: I'm not afraid for my life, I could easily get killed by something else in Nigeria - Falz says in interview with CNN's Christiane Amanpour (video) appeared first on Linda Ikeji Blog.